I was really up for a weekend of camping in the North Cascades over Labor Day weekend, but I knew that there would just be too many people out. All of the last few holiday weekends have led to careless behavior and surges in the pandemic.  The responsible thing was to stay away from the throngs.  So I hoped that on Labor Day itself, people would be heading home and I could get in a day hike in the North Cascades. 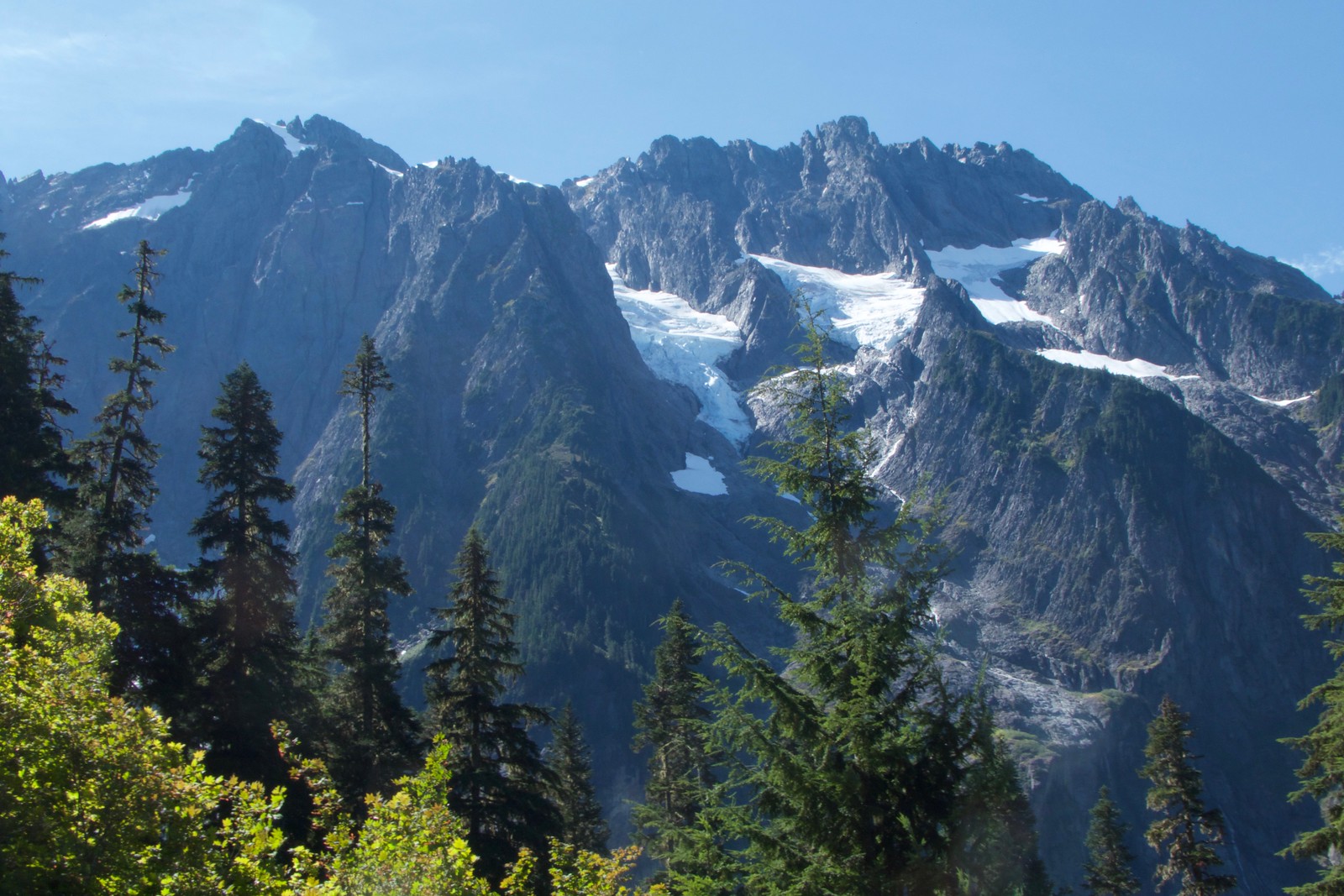 There is still so much that I have to explore in the North Cascades and this trip was my first time in the Cascade River Valley.  There are numerous hikes all along this road many with spectacular scenery.  The road ends at the trailhead for the Cascade Pass hike which at noon on Labor had so many cars that people were parking on the side of the road a half mile down.  I’d originally planned to do a hike about twelve miles down the road, but the side road had such huge potholes that I couldn’t drive a normal sedan up it. So I went to Plan B which was to hike Boston Basin about half a mile down from the Cascade Pass trailhead. Its (small) parking lot was also full with people parking in wide spots in the road both above and below the trailhead.  I knew I wasn’t going to be able to avoid people completely so I parked, had lunch and then set off. 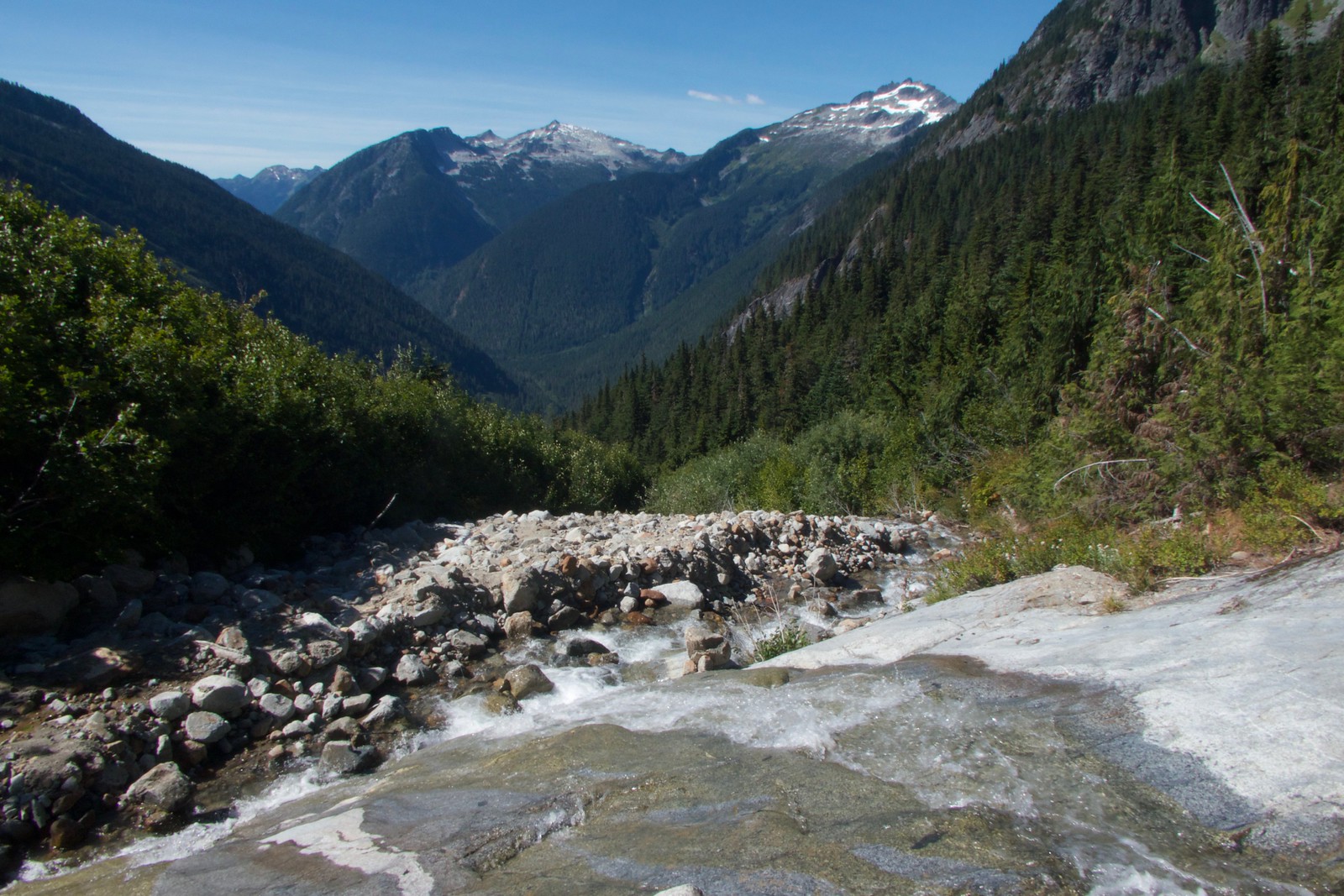 The track up to Boston Basin is a “climbers trail” which means it is unmaintained and unimproved. Very difficult hike, uphill the whole way with plenty of fallen trees to scramble over. Several sections were so step and rutted that one was almost on hands and knees. This hike was basically on a hillside with switchbacks through the woods for two and half miles before it opened up. There were three stream crossings, where you were right in the water, jumping from rock to rock.  Several points one was walking right through shrubs with no clearance on either side. I only encountered one group coming down and was glad that it wasn’t as crowded as the parking lot had made it seem. 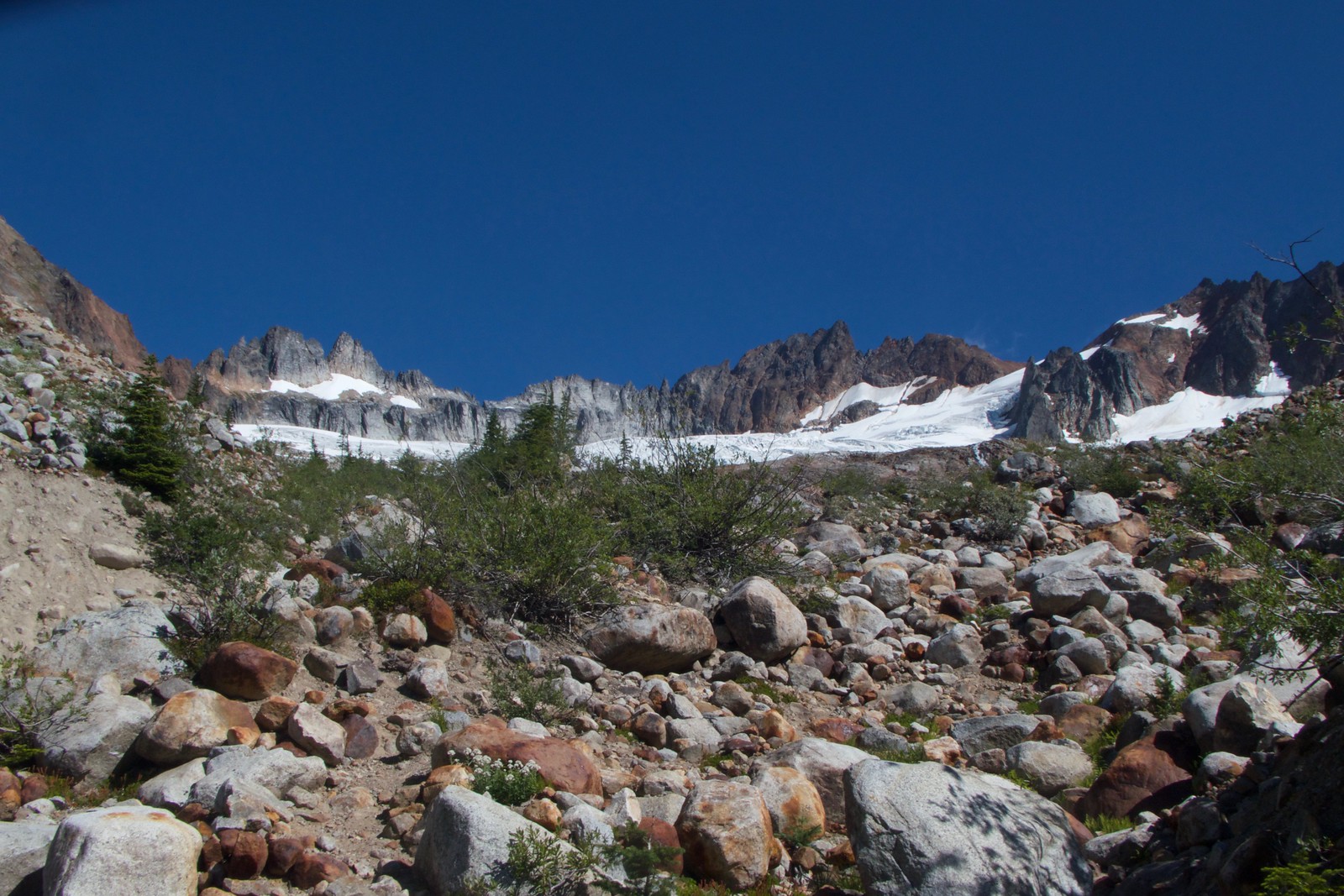 When the trail finally did open up, it was at a glacier runoff in a large rock field coming down from the ridge line. At this point the hike turned into a  rock scramble first up a steep-ish slope and then along a narrow ridge that fell away on both sides. This ended at a promontory that sloped down below this 180 degree ridge line. This was above the tree line and a glacier ended just downslope from it. This is one of the most stunning destinations I’ve ever hiked to. Right in the mountains, in a basin surrounded by peaks. One would only have to take another scramble up to the ridge line at the east side of the basin where serious summits and climbing were at hand. Incredible views, magnificent peaks. 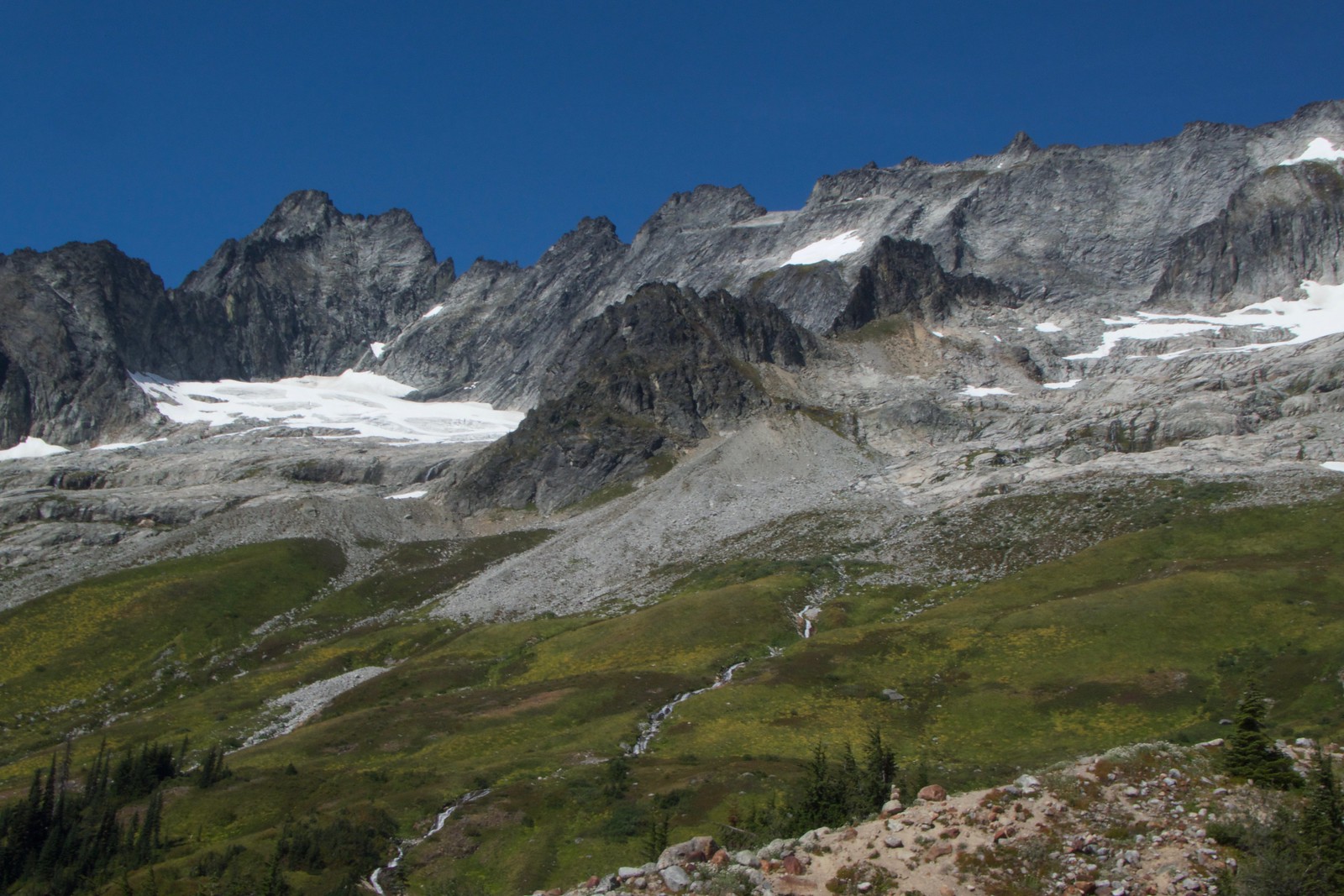 There was one guy at the top when I got there and he left after a while leaving me there alone. There was a bitter cold wind and I sat on one side in the lee of some rocks. I spent as much time there as I could before time pressed on me and I made my way down. I encountered one other group on the descent, a family with a kid who appeared to have abandoned the hike partway. I can’t say I’d recommend this hike for kids as it was really treacherous and hard but they seemed in good spirits.  So in the end I saw three groups and six people total and was by myself for the vast bulk of the day. Just what I needed: some real solitude for a day of mountain practice. 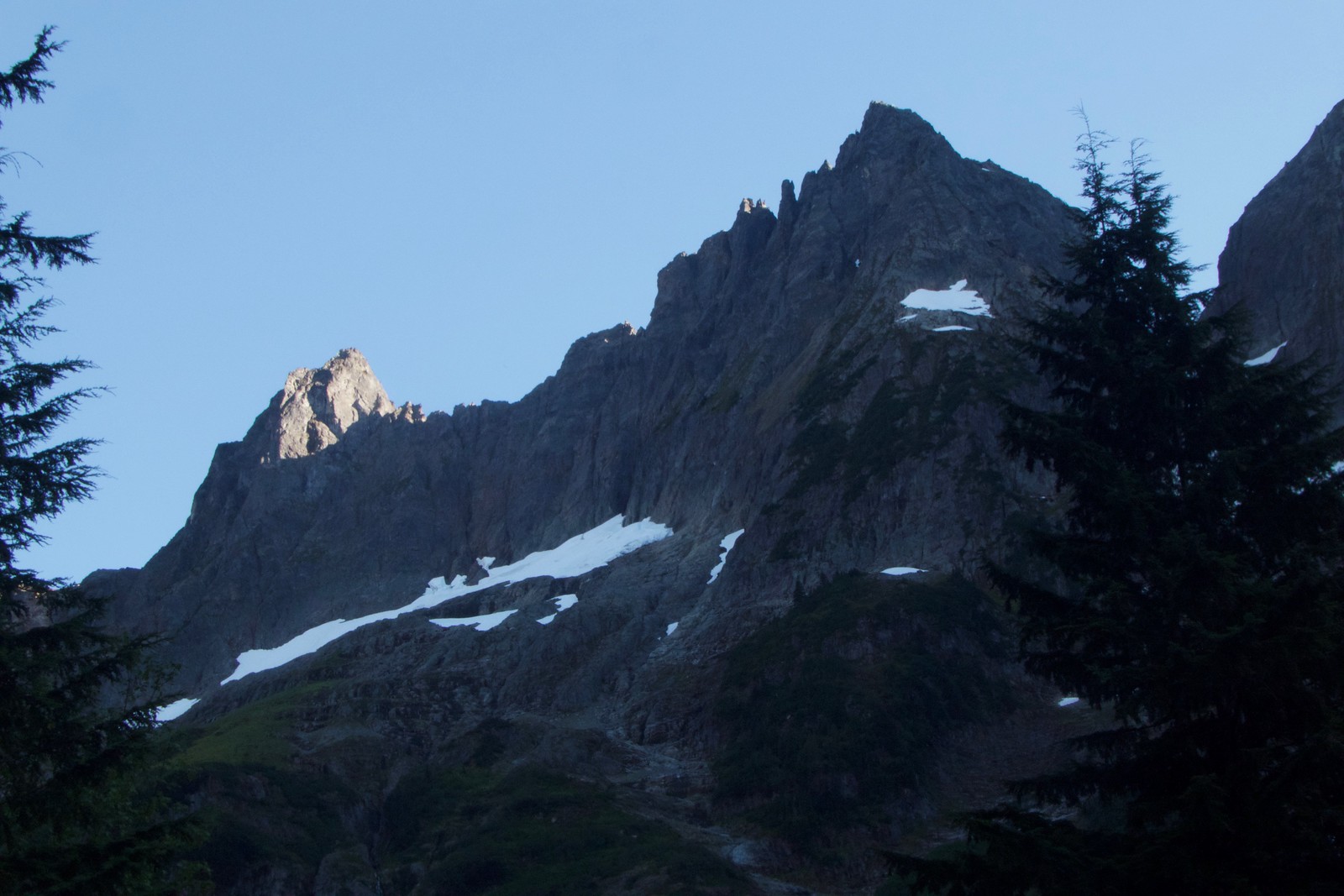 Check out all my photos from this hike: Boston Basin Dayhike