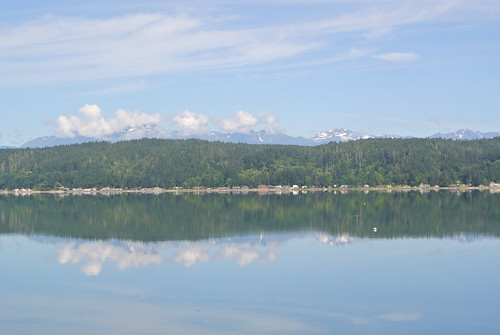 The last day of this all too short tour was another perfect summer day.  Blue skies, streak with thin white clouds, the temperatures warm but not too hot.  It was going to be a pretty short day, so there wasn’t much of a need to rush. However I wanted to be in Bremerton for lunch so while I didn’t rush I didn’t linger too long either. My companion in the hiker-biker site hadn’t caused any trouble and we only exchanged pleasantries before he rode off for the day. He had told the ranger yesterday that he’d pay for another night after returning from town today.  I never asked but I can’t deny some curiosity as to what this guys story was. 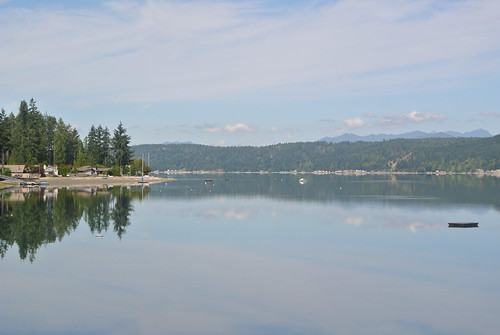 I’ve certainly noted in these page how much I enjoy riding on Hwy 106, especially on a weekday morning when there is little traffic. Well today was one of those ideal days on this canal side highway.  Beautiful views of Hood Canal, the Tahuya hills across the water and in the distance the Olympic Mountains.  The blue sky was streaked with thin white clouds.    Things were still, there wasn’t much wind and the canal was calm, allowing for the reflections to have a high degree of fidelity to the original. Which is the original anyway? 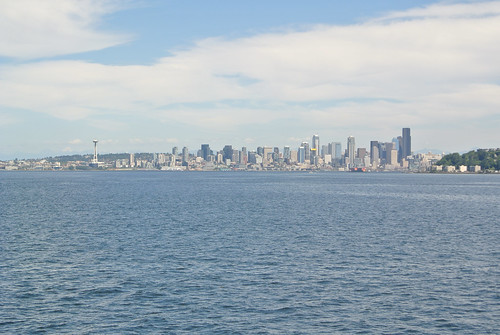 Highway 106 ends at Belfair, of which there is nothing to write home about.  However the Old Belfair Hwy, is a nice route rolling gently through farmland and woodland all the way to Bremerton.  I was on track to get to the city by 12:30 or so, so it was able to really enjoy this ride.  Old Belfair turns into West Belfair Valley road at a certain point and then there is along descent where it is near highway 3, which is the direct route between Belfair and Bremmerton. I’ve ridden 3 as well and while there is a huge shoulder and it’s relatively flat, it is just punishing with all the traffic.  West Belfair valley is much more preferable and while I oft hit 3 for the final segment into Bremerton this time I took the Adventure Cycling route which has a punishing climb up the valley walls and into hills west of Bremerton.  From there you descend into town just past the Navy Shipyard turnoff.   I arrived in town a bit before 1pm stopped for lunch and then rode that last hill into downtown Bremerton and the ferry terminal. I caught the 1:45 ferry to Seattle. 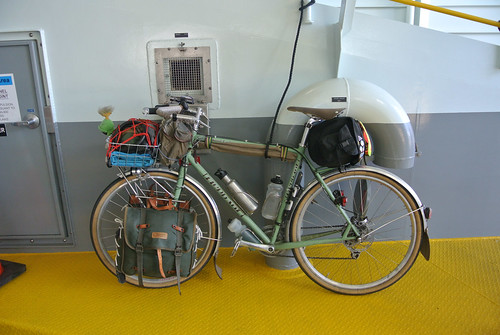 This crossing was less eventful then the one that began this trip.  I mostly stayed inside and journaled, but as many times as I’ve been on the ferries I have to go outside and take in the views.  It remained a lovely day with just enough clouds to keep things interesting.  It was the end of my trip and it felt to me like it was just getting started.  I’d like to spend more time in Olympic National Park, but riding the forest roads and hiking the many trails.  This trip was a good survey of at least one part of the park. I’ve ridden all around the peninsula on several occasions and I have a good sense of the ride out to all corners.  It is past time that I begin to make forays into the interior. 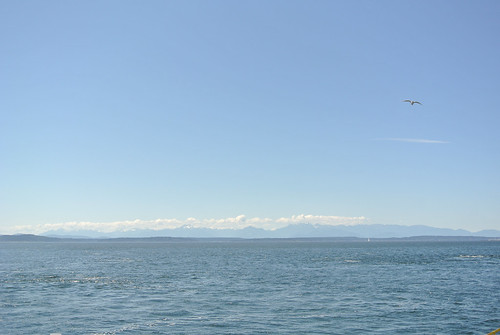