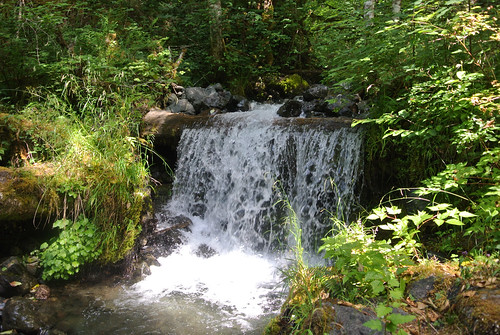 It was a lovely morning and tempting to spend another day in the Olympic’s, but it is a fairly long and rough road home. I didn’t want to just repeat the route I took here, so my return trip was going to go south and east to Bremerton and the ferry to Seattle. Thus I’ll have done a nice Hood Canal Loop in the course of this short tour. Since I didn’t have too far to ride on this day I enjoyed a leisurely breakfast and time by the Dosewallips before I set out. 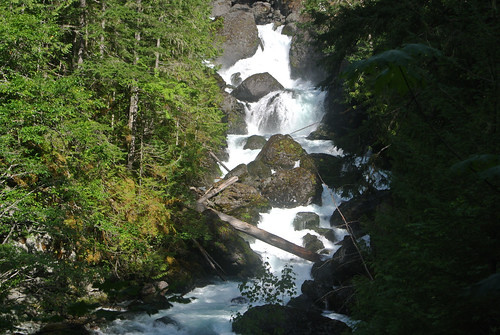 When I rode up to the campground I was chasing daylight so I didn’t linger. Well on my trip out I took the opportunity to checkout the several waterfalls, explore the Elkhorn campground, take little side trails and of course capture plenty of images. The trail being mostly downhill as well as not trying to push through as quickly as I could meant it wasn’t nearly as exhausting as the trip in had been. 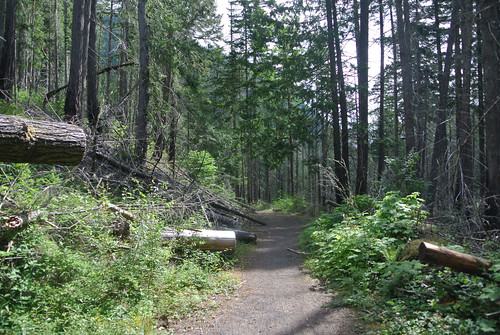 There were numerous other hikers returning on this day, it being the end of the weekend and all. But also as I got closer to the trailhead I encountered numerous mountain bikers just out to ride the on the old road. They still had to get past the first two (and in some cases third) major washouts but I suppose pushing a mountain bike when you only have a daypack isn’t nearly so hard. But as a there-and-back route it didn’t strike me as that exciting of a mountain bike route. Beautiful scenery of course, but not very technical. 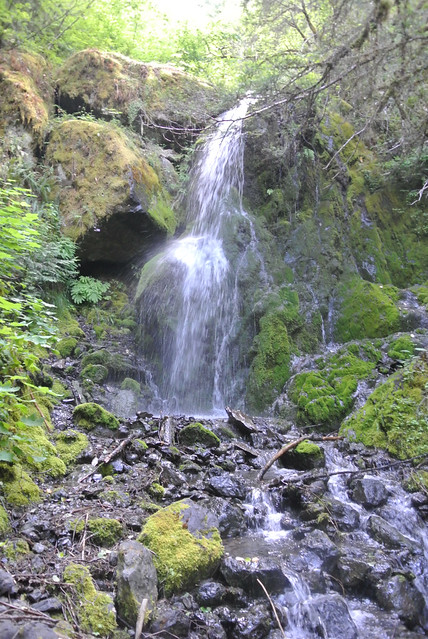 There were two little waterfalls just off the trail that were well worth parking the bicycle and tramping off to see. This one, with it’s two free falling sections cascading down moss covered rocks was especially lovely. There is a hike off of the road to Lake Constance that is two miles in length but gains 3300 feet! It is mostly a scramble up a riverbed and I image it is like the terrain below this waterfall.  But once you get up there, there is a hike in campground with only six sites.  Would love to get up there sometime for an even more secluded Olympics experience.  A lot more to do up here; I will be back 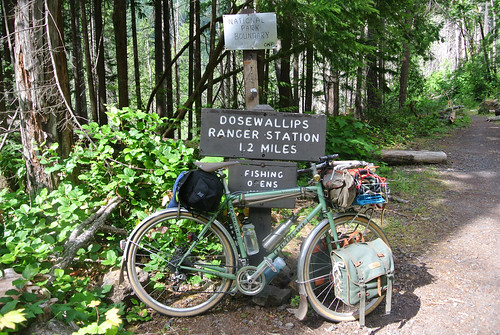 The other campground along the road, Elkhorn, features numerous sites on the river, but also a set of sites in the woods.  It seemed even more overgrown than Dosewallips Campground, perhaps it is less visited as it is pretty close in.  Just past it is the other end of the major washout. I walked down to the end of that and found that there is basically a short drop-off that one could scramble up with the help of a fixed rope, but it would have been impossible to get the loaded touring bicycle up. Glad I hadn’t tried that route.  I backtracked and once again took the steep switchbacks above the washout. 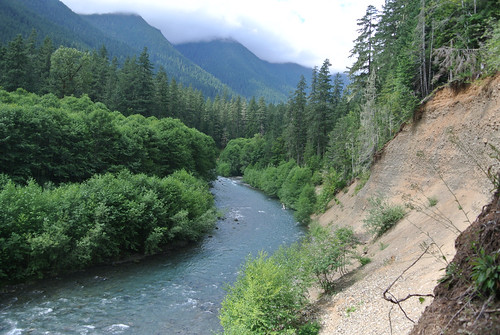 Most of the way down the other side of the washout I took another little side trail that give you a good overview of the washout. You can see from the above picture that basically the whole riverside just sloughed off. No sign that a road had ever been there.  From this point on it was an easy ride back to the trailhead, which of course was the first washout but wasn’t nearly so hard to bypass. 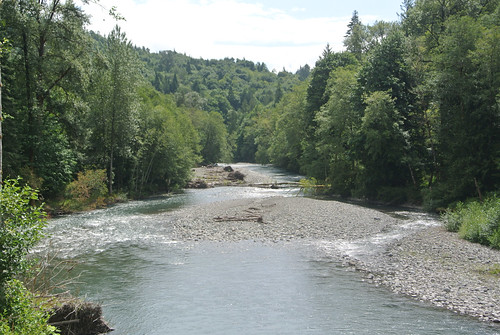 This day had dawned cool and overcast, but it had pretty well cleared up. But clouds and mists kept pouring over the hills and like the day before I was sure that it would cloud up again toward evening.  But as I rode out of the National Forest on Dosewallips River Road it became increasingly clear.  By the time I reached Brinnon and returned to Highway 101 it was blue skies with big pillow like white clouds. 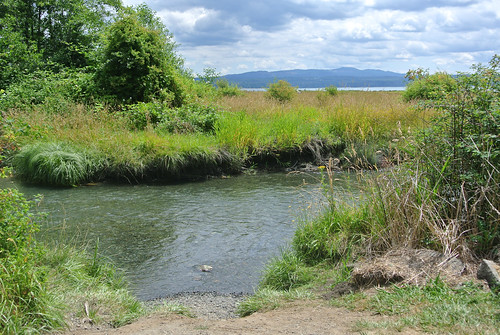 It was near lunchtime now and I pulled of at Dosewallips State Park and in the day use area had lunch. The park was right at the end of the Dosewallips River where it flowed into Hood Canal.  The wind had picked up blowing the big clouds around.  My route on 101 would wend along Hood Canal, always going up and down, with small little tourist areas in the rare flat spots.  It being the end of the weekend and all these spots were jammed with people trying to get in a last bit of recreation on their way home.  There was a line out the door at the Hoodsport Coffee Company and I’ve never seen so many people at the Union General Store.  Both times I would have stopped at those places for a break, but just too long of lines. 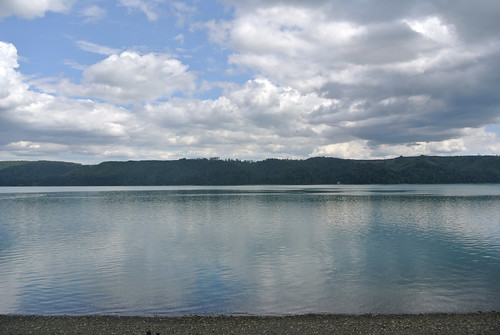 I was going to camp at Twanoh State Park, which has a very limited Hiker/Biker area but I figured Sunday evening wouldn’t be too bad.  There was a stiff wind heading East on SR106 and I was feeling the end of the day.  When I got to Twaoh there was  tent in the h/b area but no sign of it’s occupant. I’ve shared the space before so I went into the campground proper to register.  They thought it was “full” but checked their records and found that no-one was registered for tonight. This was good as the main campground was full.  I mentioned there was the tent there and they sent a couple of junior rangers down to check it out.  When we got their I began to setup and they investigated the tent.  They kind of ripped it open and reported not much inside. They said it looked abandoned and headed out. 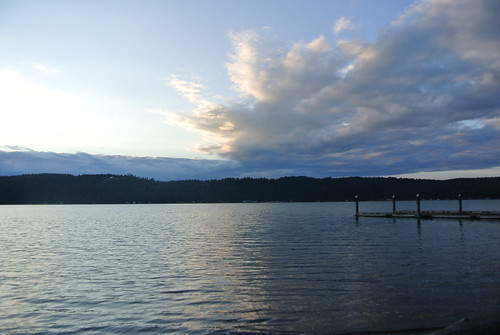 I finished setting up and had begun to cook dinner when the tent’s occupant arrived on a folding bicycle. He said “hi” and sat down to eat some take out food.  A bit later he checked out the tent and asked me if I’d seen anybody messing with it. I mentioned the rangers had been looking in it.  He said “Well they basically destroyed it!”. He had a beer and then set out. I ate dinner and washed up and went out to watch the sunset over Hood Canal.  I heard raised voices from camp and the ranger was there trying to talk with the guy. He accused them of destroying his tent and got pretty shirty.  There was some words from the ranger, basically noting that he wasn’t actually paid up and shouldn’t be there and such and eventually he left.  I was sitting in my tent a bit later when he retuned and squatting down at my tent entrance asked me to verify the guys story. I confirmed that the junior rangers had inspected the tent but I didn’t see them rip into it or anything.  He asked if I felt safe with the guy there. I said he seemed okay and I didn’t mind that he was there.  The ranger went and gave the guy some duct tape so he could do some field repairs and then left. The evening ended uneventfully. The guy repaired his tent the best he could and retired as did I.