a blue dragonfly
flies backwards down the path
watching

When a retreat that I was going to take part in fell through I suddenly found myself with five free days in mid July. Within a couple of days I worked out a trip I wanted to take that would maximally use those days and take me to a place I hadn’t been to before. I had found out that a road had washed out on the eastern side of Olympic National Park cutting off two campgrounds, but that you take your bicycle on the old road.  This was technically within a days ride, but would, I thought, be a pretty long hard day. I planned to ride to Dosewallips State Park, on hwy 101 which is around 20 miles from Dosewallips Campground, in the Olympic National Park.

My touring setup is pretty much set in stone these days, all kept in one bag in a closet. I can pull it out and be pretty much ready to tour within a couple of hours.  Buying and packing some food and selecting appropriate clothing is about the only variables not preset.  Of course I do have several options depending on length or type of tour and for this one, where I’d be camping and then day hiking in the woods, I adjusted things accordingly.  I swapped out my Rando bag for my basket and put on my old Baggins Hobo bag for the rear facing pockets.  This gave me enough space for the supplies needed for time in the woods.

I made it to the ferry terminal by 10am which is pretty good time for the first day of one of my tours.  But I had just missed a boat and when the next one came in there was a crew change and the hauling off of a dead motorcycle.  When we finally departed it was about a quarter to eleven.  I was in the cafe buying a coffee when the woman next to me in line asked: “Is this the bar?” It’s happy hour somewhere… At one point during the crossing the boat slowed and the engines stopped. There was an announcement over the PA for a crew member to come to ‘Fan Room 2’.  Was this going to one of those trips?

As I made the crossing I contemplated my preparations and realized I had neglected to bring my headlamp.  That a bit of food I still needed sent me to the little town of Winslow on Bainbridge Island where I also was able to get lunch.  I found my forgotten supplies and proceeded to ride across the Island a bit after noon.  Now his route is one I’ve done several times: Bainbridge to the mainland via Hood Canal.  There are several options and several highways but of course the goal is to stay on backroads.  However right after crossing Agate Pass off of Bainbridge I failed to take a turn and thinking Google Maps had just put me on a different crossing of the Kitsap Peninsula I continued on the hwy.  As I came up on Pouslbo I knew I was off route but I also knew this busy road would get me where I was going. I peeked at Maps on my phone and found an alternative backroad option that I didn’t have to backtrack to.  This road, Big Valley Road, turned out to be just top drawer country riding.  Much flatter then the normal cross Kitsap route I’ve taken, but equally low traffic and scenic.  Nice.

Big Valley Road intersected with Hwy 3 at Four Corners and from there it wasn’t too much further to Hood Canal Bridge. As I climbed up the last hill before I’d descend to the bridge, cars were backed up — the bridge must be open.  I was able to easily wend my way down to the bridge and along the nice shoulder all the way to the barriers.  The drawbridge was indeed up, but for no discernible reason.  There are long views both north and south of the bridge and there was no sign of any boats. Even when submarines come through here — which is often — there are jamming boats along with them.  So perhaps just some sort of test or safety check.

There was a stiff wind blowing south, which happily was the direction I was going. But things were dark and forbidding that way whereas the wind was blowing the clouds away from the north.  Once the bridge finally opened I continued west, mainly on Hwy 104 but taking side roads when I could.  Once you climb up from Hood Canal to the north is Beaver Valley which I’ve ridden many time to and fro Port Townsend.  All the sudden I felt a pang of desire to go to Port Townsend. It was almost cold now under dark clouds and there was even the slightest of sprinkles.  As I crossed Center Road which goes north up Beaver Valley to Chimicum and then PT and South to Quilcene where it intersects with Hwy 101 I saw a handprinted mural that read 24 miles to Brinnon. Brinnon was just outside of Doswallips State Park, my destination.  PT on the other hand was 14 miles to the north up Beaver Valley.  To the south was Walker Pass (not an epic pass, but a couple mile climb) and dark menacing clouds.  To the north it was blue skies, easy valley riding and PT with restaurants and pubs.  I went north.

There are three roads that run down Beaver Valley: one on the west wall, one down the center and one at the foot of the east wall.  I was on the middle way, Center Rd. which is the easiest of the three (the west wall is the hilliest fwiw) and the valley protected me from that northerly wind. So I made good time to Chimicum and then to Fort Townsend State Park. This park sits about 5 miles south from PT proper and it is a favorite of mine to camp at. 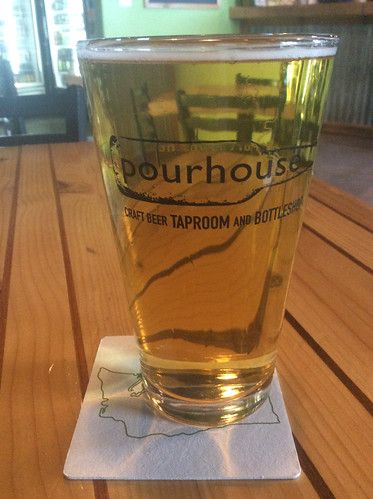 The Hiker/Biker site is a bit away from the rest of the campground and is basically a clearing in the woods. Of the half-dozen plus times I’ve camped there only once has there been another touron there.  Once!  It is about a mile from the Olympic Discovery Trail so you can easily ride into PT which after setting up I did. I had dinner at a very busy (and just okay) Thai joint and then retired to the Pourhouse for an after dinner pint.

As I rode back to the campground, the sun had set and a light purple glow lit up the Cascade mountains far to the east.  A truly lovely evening.  It was dark in my wooded campsite when I arrived, but I only had to lock up my bicycle and retire to my tent for the evening.  I was happy to be here.