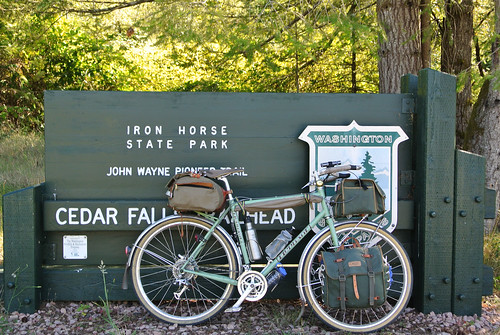 In 2016 I undertook three tours, the last of which end abruptly. This is the tale of that tour. My plan was to take the bus up to North Bend and then ride to the Iron Horse Trail which I would then take nearly to Cle Elum.  From there I’d ride to Roslyn, Cle Elum Lake and then to a campground on the very edge of the Alpine Lakes region.  There I would camp for several days and hike toward The Enchantments.  Finally I’d make my way back.   I also thought if it looked good, that do the Stampede/Tacoma Pass loop off of the Iron Horse Trail. So this was going to be a mixed-terrain, bike packing, hiking adventure in the Alpine Lakes Wilderness region of the Cascades.

I left Beacon Hill in Seattle September 12th for a week long jaunt before 9am.  A good start! I rode a couple of kilometers to a bus stop on I-90 where I caught  Sound Transit 554 to Issaquah. Unfortuently I was too late to make the connection for King County Metro 208 up to North Bend. As that bus only runs every two hours (!) I decided to ride up to it’s last stop before entering I-90 and meet it there.  So I rode through Issaquah and onto the Issaquah-Preston Trail. Absolutely glorious day, with a pure blue sky, and the sun filtering through the trees.  Being mid-September it was comfortably warm but not hot.  Looking to be a great week in the mountains. I made it to High Point where that bus stop was with still more than an hour till the bus would arrive.  Oddly there was a car fully in the ditch in the freeway underpass. I decided that I would give up on the bus and just ride on from here.

I continued on the Issaquah-Preston Trail, to Preston where I then transitioned to the Preston-Snoqualmie Trail.  All familiar routes so far.  But instead of the various ways of working my way up to Snoqualmie Ridge, I instead rode down to Fall City and then up the road to Snoqualmie Falls.  With all the attempts I’ve made to avoid this route with a full touring load, it turned out to really be no big deal. It’d be less fun for sure with dense tourist traffic, but on a Monday morning mid-September, not bad at all. I arrived at Snoqualmie around noon, so of course lunch was at the Snoqualmie Falls Brewery.

It was pretty warm in Twin Peaks, err North Bend and I was happy to get back into the woods and make my way further up into the mountains.  I was going to be riding all the way across the back and camping on the east side this night (why I wanted to bus to North Bend and cut out some riding) so there was a lot of miles on gravel ahead.  The ride through the woods was quite enjoyable.  The seasons are always in advance in the mountains and the signs of Autumn was everywhere. Yellow, golden and red trees stand out amidst the bountiful evergreen trees.  People were out, but with it being during the workweek and school back in session, there were no crowds.

Long distances on gravel wears you down, the extra resistance, the vibration in your hands, needed to hold on more firmly to the handlebars. Riding the Upper Snoqualmie Trail and then the Iron Horse Trail for around forty kilometers, you definitely feel it. These trails keep to a minimal grade, around 2-3% but it does so for pretty much the whole way. That just adds to the effort required. But it is great to be in the woods, in the foothills and the Cascades. I-90 is always nearby, but you are completely out of traffic and I love it.   The sun sets early in the mountains, even on the longish days of the end of summer.  The shadows were getting longer as I rode through the two mile long Snoqualmie tunnel.

Through the tunnel I was at the Hyak trailhead. I stopped there briefly but soon rode the last few kilometers to Cold Creek Campground.  There I filtered water, made dinner, setup camp and all of the other details of camping out in the woods.  Soon it was dark and cold and I was happy to get into my tent in the moonlight and retire for the night.