Sunday January 24th was a splendid winter day. The sun was out, chased around the sky by big fluffy cloud ridges. In the sun I was overdressed and hot but when the sun was behind a cloud it was definitely winter.

I wanted to outside, but I didn’t have much of a plan. I left around 11am so I knew that I’d been need lunch. I also wanted to get over to the Eastisde but I wasn’t sure where exactly over there.  Heading to the eastside means the Mountain to Sound Trail so I headed straight there.  At the Mount Baker Tunnel, my plans crystallized and I rode down to Leschi at picked up provisions at the Leschi Market.

I had to get back to the Mountain to Sound trail but I didn’t want to just backtrack. So I road along Lake Washington until I went under the I-90 Floating Bridges and then up the great winding road through Coleman Park. There is a huge P-Patch at Coleman Park and it is a testament to the warmth of this January that there was plenty of work going on there. Getting ready for spring.  This route takes you above the Mount Baker Tunnel and after a short stop for photos, I descended onto the bridge. 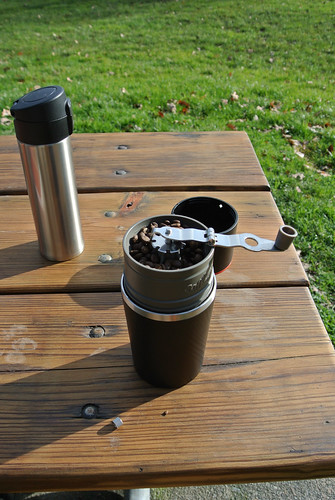 It has become such a routine ride now: across the floating bridge, leave the trail and ride the perimeter road around Mercer Island. Then it’s the second floating bridge and you are on the Eastside. But today I stopped at Luther Burbank Park for a picnic lunch.  I rode down into the park on it’s dirt paths winding around the earthwork The Source to a picnic spot right on Lake Washington. It was warm enough here in the sunlight that I took off my sweater as I unpacked my picnic supplies.

I had planned on making coffee as well on this trip and I brought my Cafflano – an integrated burr grinder, drip filter and drinking vessel.  Instead of boiling my own water I brought a thermos of hot with me. I have to say this worked out well and I had the best cup of coffee I’ve maid out-of-doors.  Lunch was a baguette with smoked cheddar, avocado and an organic honey crisp apple.  Really enjoyable.   The park, like all of the parks I’d go by/through on this day, was quite active as us PNW’ers don’t pass up a warm winter Sunday to get out. Sitting here on the edge of the park I can see out to the Cascades which look tantalizing as if brushed with snow.  I began to feel the stirring in me, drawing me to the mountains.  But I couldn’t go them on this day.

A thousand parks: no more birds in flight.
Ten thousand paths: all trace of people gone.

In a lone boat, rain cloak and hat of reeds,
an old man’s fishing the cold river snow

Translated by David Hinton
from Mountain Home: The Wilderness Poetry of Ancient China

I’d decided now that I’d ride the north end of the Lake Washington Loop which provides for a nice ride along the lake with some hills and would take me through Bellevue, Kirkland, Lake Forest Park, Kenmore and back into Seattle via the University of Washington. This is a familiar route, but I don’t do it so often these days. It was a great day for this ride and I did take a few jogs off the route for better sights and around more parks. In Bellevue stopped at Cafe Cesura and had them put loose leaf green tea into a tea bag and refill my thermos with hot water.  In Kirkland I turned off the loop to ride up Waverly Way past Heritage Park and on a bluff above the lake. Then it was hill climbs up Market Street in Kirkland and then up Big Finn Hill from Juanita.

Once again I dropped off the route, dropping all of the elevation I’d just gained back to the lakeside at Holmes Pt.  Down there among all of the McMansions is O.O. Denny Park, a nice big stretch of open space right on the lake with expansive views north and south.  I stopped here and made my tea and did a bit more reading.  After lingering a bit I reached that time where I’d have to leave if I wanted to be home before dark.  I had to climb up from Holmes point but then it was the long descent down Finn Hill.  This take you to Kenmore and the intersection with the Burke Gillman trail at Logboom Park.  I tend to avoid the trail on sunny weekend days, but I the alternatives are a lot hilly and longer, so I decided to just cruise back into the city.  Well it wasn’t so bad — people were definitely out, just like at all the other parks, but it wasn’t packed.

I made good time one the trail and the times were the lake was visible there was very tantalizing views of the mountains in the distance. The dwindling sun was coloring the sky with soft pinks and purples. Everyone once in a while I could glimpse Mount Rainier which was obscured by clouds when I was in my prime viewing spots.  No good place to stop for pictures when I could see it, so Mount Rainier amidst torn up purple clouds will only remain recorded in my memories. Once I arrived at the U-Distrct it was back on the Lake Washington Loop through city neighborhoods. I left it on my old commute route along the backside of Capital hill, which let me make my way back to the Mountain to Sound Greenway which I could connect to the Beacon Hill Greenway and then back home.