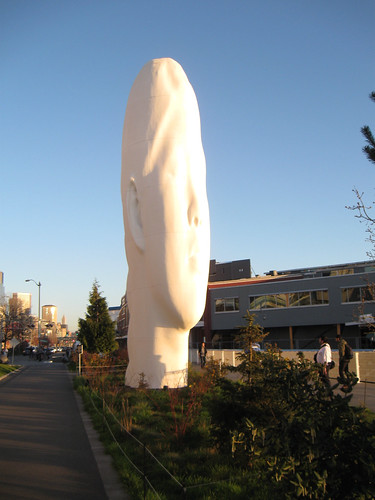 For various reasons this year I’m going to have extremely limited options for bicycle touring, most likely limited to overnights and three day weekends. For me what I really love about touring is the mindset that you get into, a form of mindfulness where you are in harmony with your surroundings, bicycle and body.  After all my touring I’ve found that I’ve been able to slip into this mindset on longer day rides, where I just let go of the thoughts and concerns of everyday life and just ride. I tend to have no problem coming up with rides that I like to do, but motivating to get up early and do really long rides can be lacking. This is one of the reasons why I really like the PNW summers where you can start late and still be rolling in the twilight well after 9pm.  But it isn’t summer year round and so I’ve finally decided that this is the year to dabble with randonneuring. 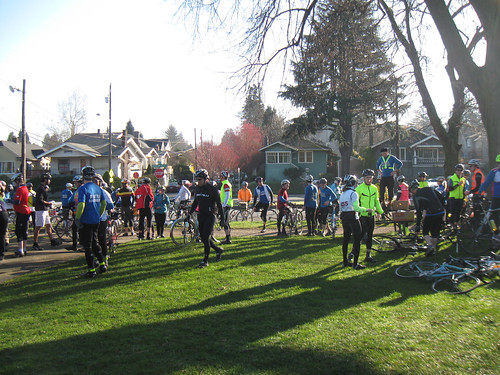 Almost every time I return from tour, I say to myself that this year I’ll start randonneuring in order to keep my tour fitness. Hasn’t happened.  But for the reasons listed above I finally made a start of it with the SIR 2015 populaire.  Not a brevet, so not quite randonneuring proper, but a good start. A 200k will certainly be in the cards for this spring, but I was happy to do my first organized ride in years.  Another stumbling block for me and randonneuring has been the early starts, but in the last year I’ve completely switched from being a night owl to being an early riser.  Now most rando events start pretty much well after my normal rising time. 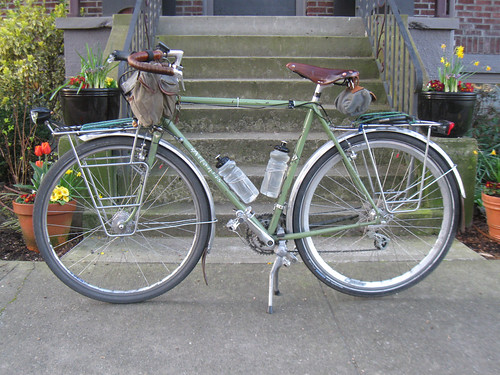 March 7th was the SIR/RUSA 100k Spring Populaire and it was a beautiful warm late winter day. It was no problem for me to ride to the start at Woodland Park about 8 miles away, arriving a good 30 minutes early.  It proved to be a well attended ride with over a 100 riders pre-registered and plenty more day of registrations.  I wandered around drinking the free coffee and checking out the diverse bicycles. As with any organized event, you are going to see all kinds of ‘cycles from classic 70s steel bicycles, to the au currant low-trail, big boxy bag, 650b machine, to the latest carbon fibre racing machine.  Some lovely bicycles there for sure. As for myself I was riding my venerable Atlantis, but stripped down about as much as I ever had.  While a populaire is not what I’d consider “big deal” distance, even with the ride to and from the start, I knew it’d be much faster than my usual “spacing out” pace. The big group set off right at 9am riding along Green Lake in the morning sun. The day was already beginning to warm up and not too long from now I’d have to stop to remove my wool cardigan and switch to short fingered gloves.  The route took us east from Greenlake – including a short gravel stretch through Cowen Park – to the U-District and onto the Lake Washington Loop.  Then it was up to the I-90 Bridge Trail across to Mercer Island.  By this point things had sorted themselves out, with the fast riders jackrabbiting off and the rest of us settling into little groups of similar pace. I ended up riding with a group of guys from Olympia and Seattle who were perhaps just a bit faster than I would ride, pushing me nicely the whole way. 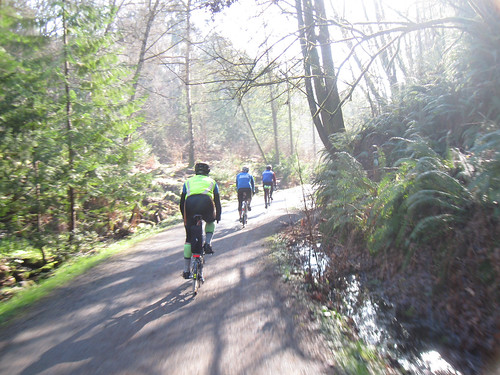 I’ve ridden all the parts of the ride many times and had even ridden the reverse of this one last autumn (modified to start and end at home of course) so it was familiar territory. But out on this sunny winter day, pushed on by 100+ riders it was definitely a different experience. Of course there was also the controls which I’ve not had to contend with before. No big deal; you just have a card with a series of locations that you either get signed by a SIR volunteer or you answer a question proving you were at the spot. It does require you to be self-policing for the most part, but really any cheating on the routes or anything is just cheating yourself.  There’s nothing to win, so no real point. 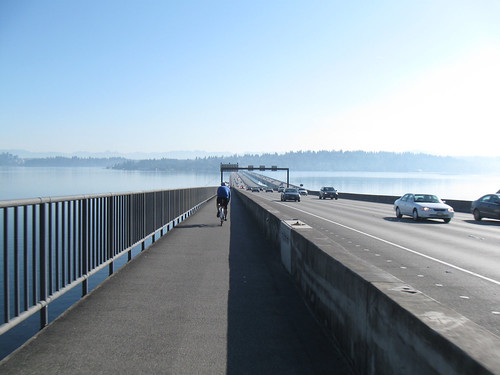 The route worked it’s way around Issaquah (where I’ve rarely ridden to without a stop at the Issaquah Brew House!) then out on some more country roads as it worked it’s way to the Cedar River Trail. We had the first Info Control just outside of the (always) quite crowded Tiger Mountain Trailhead, where had to note what was written on a particular sign. Then it was back on the road to take nice wooded roads to the Cedar River Trail.  There was a short stretch here where I was riding alone and of course this was the one place where the sign for a turn was obscured and easy to miss. But I only rode fifty feet or so past it before feeling I should check it out looking back saw the sign.  Glad I did as it was above to do a long steep downhill dive that I wouldn’t have appreciated backtracking on. 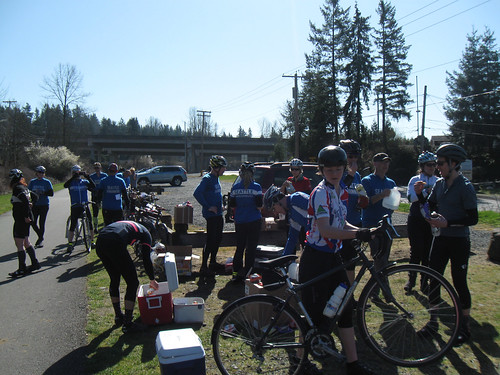 Where we entered the Cedar River Trail there was another control, this one stocked with snacks and water and such. I got my card signed, refilled my bottles and ate a few snacks. It was about noon at this point and I realized that not bringing some real food with me was a mistake.  Snacks are fine for some quick energy but I’ve found on any decent length ride I need to eat some actual food. I compensated as best I could with peanuts and other snacks with some protein content, but pretty much figured getting to the pizza place at the finish was my best bet.  So back on the bicycle and on the Cedar River Trail. 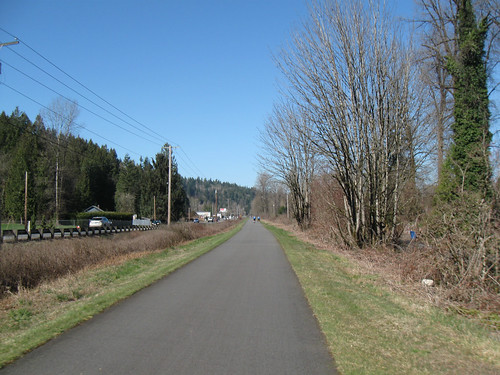 I figured the Cedar River Trail  was an opportunity for some easy, fast riding to eat up some of the remaining miles before returning to the city and the several climbs to the finish point. It did begin that way, but due to a constant headwind, it slowly wore me down. That and the aforementioned lack of food made for the last few miles on the trail to be kind of a slog.  Once I was in Renton though things perked up a bit. We wound through side roads until we reached the Renton Airfield and were back on the Lake WA Loop route.  It’s a pretty fast ride from here into Seattle Neighborhoods though Rainier Ave is a pretty trafficked and loud route. 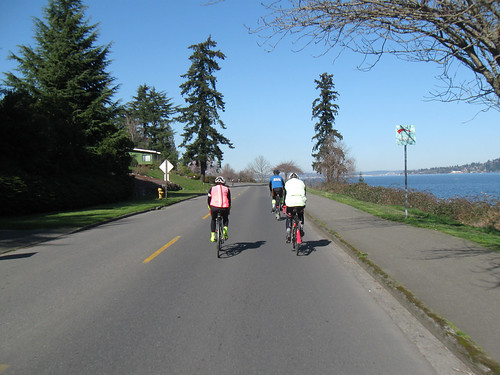 As we made it to the Rainier Beach portion of town there was a blocked off chunk of road, for some utility work it looked like. I hopped on the sidewalk and through a parking lot of a park to bypass it staying on route.  Past that it was a bit of a climb and then a descent down to Seward Park and we were back on the edge of Lake Washington. A lot more cyclists on this stretch of road, which is certainly on of the more popular Seattle Riding destinations.  It leaves the lake with a classic winding climb up in the Washington Park neighborhood and then across the arboretum.  This route through the arboretum is not one I’d done before (I just typically stay on the main road through) and it was I much nicer option, though a wide paved trail across the park. 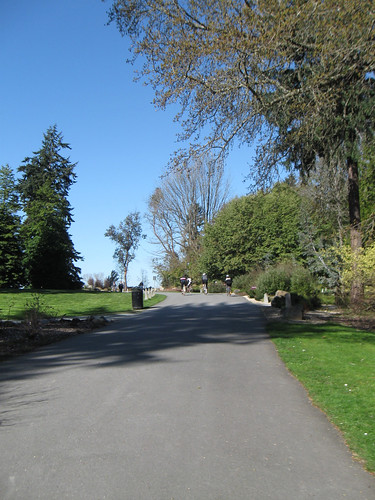 Once out of the arboretum we cross the I-520 and were back in the U-District. The route took us on a short stretch of the Burke Gillman Trail to Fremont, up Stone Way and then Fremont Ave until we had climbed up Phinney Ridge – always nice to end your ride with a good climb! Phony Ridge featured the Zeeks Pizza where the ride ended.  I had completed my first SIR event at 5’20” – about middle of the pack it appears from the results. 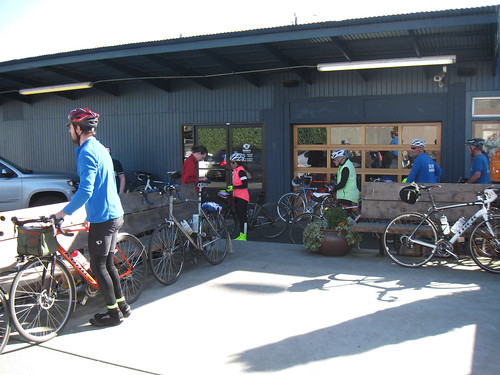 I got into Zeeks and immediate ordered a Veggie Thai Pizza (my favorite thing from them) and a beer. Ended up hanging out with a few of the riders I’d ridden with for some of the time, plus several others. Everybody was really nice telling many a story of brevets past and speculating on those of the future.  The 200k was just the next weekend, but alas I had a prior commitment. But I will be back for the next one! 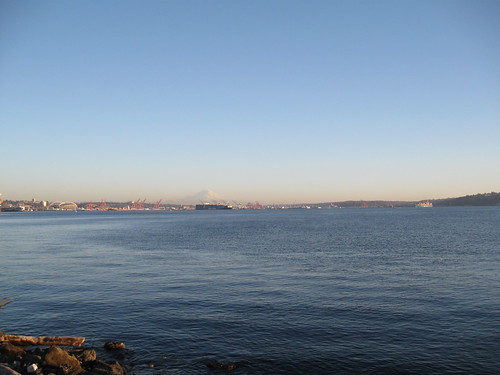 Feeling really well recovered I took a different, slightly longer, route home along the Seattle Waterfront. It was packed with people of course, so I set a nice leisurely pace. The sun was going down and everything was lit with the rich light of magic hour. I was feeling pretty good after this ride, which as I suspected I did at much faster pace than normal. But of course I did have to climb Beacon Hill to get back home – as noted always good to end your ride with a good climb.
Check out all of my pictures from this ride on Flickr: Spring Populaire 2015.