The end of the 2014 has been marked by unusually wet and warm weather (pineapple express!) interspersed with unusually dry, clear and cold.  Sure it’s not the approaching absolute zero of the midwest or what have you, but it’s been cold. However I wanted to get in one last ride for 2014, plus I needed to get some ingredients for a New Years potluck and I’ve had those coffee outside plans hanging fire so on NYE’s I set out for a little jaunt around the city.

As always I set out late, so I rode across Beacon Hill, stopping only once at a stairway that gave me the above view of snow speckled Cascade Mountains.  It’s only been four months since my summer tour in the mountains, and I have to say I’ve been pining for them a bit.  Both the Cascades and the Olympics, snow covered, but well below average, are really looking lovely on these crisp, icy blue days.

After this brief photoshoot I rode down the hill into the ID where I picked up Spicy Tofu Bánh mì for lunch at the always great Chu Minh Tofu & Vegetarian Deli. From the ID it was a short jaunt though Pioneer Square and the interminable construction to the waterfront where I had a wintery picnic.

On the water there was stunning views of the Olympic Mountains across the Sound and Mount Rainier to the South, somewhat obscured by the Port and haze. While I was eating a train that was just five engines steamed up the nearby tracks.  After lunch I took some pictures on the beach, but the cold air and fell winds soon pushed me back onto the bicycle. It was one of those days where you long for the climbs to warm you up and dread those icy descents.

I rode up the Elliot Bay Trail and then did the a clockwise loop around the Magnolia neighborhood. This begins with a good climb up to Magnolia Avenue which hugs the bluffs above the sound. Some nice views south and west of the Sound, West Seattle, the Peninsula and the Olympics.  I kept moving though and when the road turned inward a bit I took a residential road that dived down right to sea level and then pretty quickly followed was a steep climb out. This brought me to Discovery Park which I pretty much just rode across and through until I was back on the scenic loop route.

I cut over to the Ballard Locks and as I was about to descend down to the locks proper I noticed a little secluded picnic area.  I decided to pull off over there and finally have make my coffee out of doors. Third time is the charm!  It was much cooler in the shade (and it wasn’t that warm to begin with in the sun!) so I was pretty happy when the coffee was bile’d and I sat for a spell enjoying it in the company of Ryōkan.

Even though this was a pretty isolated part of the park a few people did come through.  A homeless guy came through and I chatted with him a bit. Mainly about the cold weather, but he was also curious if I’d seen his buddy on a ten-speed. I had not. He wandered off and I read this poem:

In town I finish begging for food.
Content, I carry the cloth bag,
wondering which place to call home.
Could that be my home near the white cloud?

My coffee drained I was rapidly cooling down, so I packed up and headed down to the locks. There were people out at all the parks I visited on this day. It may be cold, but it is sunny and many people are off – I’m not the only one wanting to get outside.  The locks were active as I was down there, a series of boats cruising into one of the locks and then slowly rising up as they are brought to the level the lake. A series of announcements from the Lock commander gave everything a bureaucratic edge. 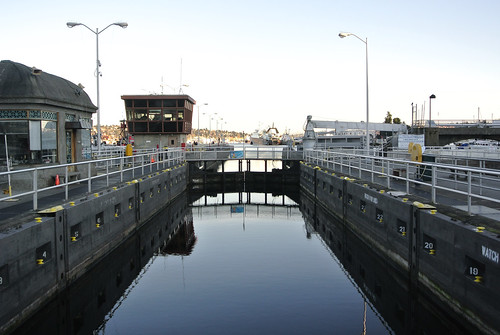 Still water in the lock

I walked my bicycle across the locks and through the park grounds and I was back on my bicycle. I rode through town and onto the Burke-Gillman Trail, which has a new separated bikeway in one of the previously more dangerous spots in Ballard. I took the trail to Fremont, where I stopped at the PCC and took care of that shopping I had to do. I loaded my groceries into my front basket – my saddlebag had my cooking kit and daybag in it – and in the now setting sun I began to make my way home.  I took a mix of the BGT, waterfront roads to the U-District where I was able to take my old commute route. 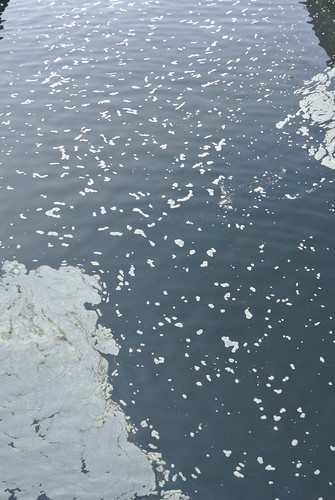 The sun had set as I climbed up Capitol Hill but there was this layered yellow-orange-red glow outlining the Olympic Mountains deep in shadow above the Space Needle and the Seattle skyline. Glorious.  Since the traffic seemed fairly low on this NYE’s I rode on broadway and the entire length of the newish cycle track. There was still a glow in the sky behind Sodo and the distant mountains as I crossed the Jose Rizal Bridge and began my climb up to Beacon Hill. I arrived home around 5:25 in nearly total darkness after having ridden just over 25 miles on this cold, New Years Eve.  A fitting end to 2014.

See and realize
that this world
is not permanent.
Neither late nor early flowers
will remain.

More pictures from this ride can be found in my Last Ride 2014 photoset.