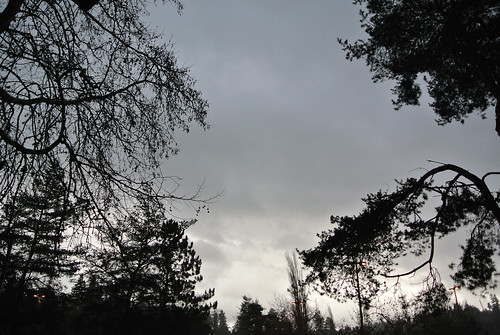 As I noted in my Solstice Ride post, I’d set out with the thought of walking along the shore and making some coffee (or tea) in the out of doors.  That did’t end up happening as my wandering nature got the best of me and the lure of exploring new territory proved stronger.  With the weather predicted to turn clear and much colder over the next week, plus frankly I’ve been feeling a bit sedentary these days, I set out yesterday amidst heavy clouds, wind and threatened rain on a second attempt at making coffee out of doors. 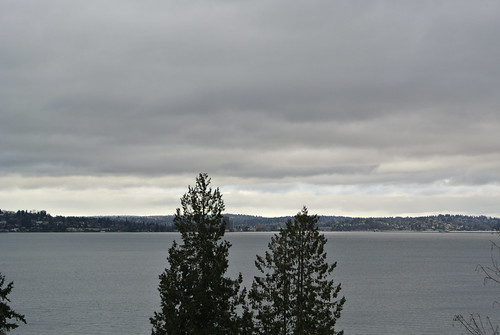 I’ve been contemplating taking part in an organized ride (!) next year that begins in the AM in Redmond so I thought I’d ride there and gauge the miles and and time that would require. But the straight shot there isn’t super scenic so I decided I’d ride to and around the east side of Lake Sammamish. There I’d be able to stop at the park and make my coffee. 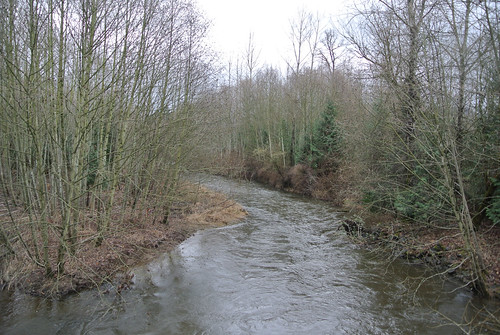 There were gashes of blue sky amidst the layers of grey clouds and low black clouds blowing in on the wind. This rainy weather coming in was warmer, if not warm, and the hilly route over Mercer Island kept me warm enough. Exiting Mercer Island I continued on the I-90 Trail to Issaquah. Here I encountered Lake Sammamish State Park, but decided I’d stop a bit further on, on the east side of the lake. From Issaquah I was able to hop on the East Lake Sammamish Trail which pretty quickly took me to the Lake Sammamish State Park and boat launch where I’d planned to stop. But there were no picnic tables there so I decided to press on to Marymoor park. 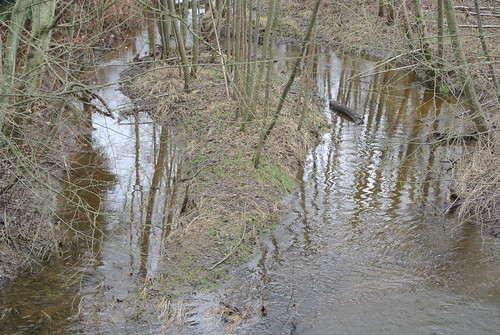 Back on the trail, which is newly paved inside Issaquah city limits, but the moment you cross into the city of Sammamish it reverts to the old hard packed gravel. At which point I returned to the road. I hadn’t been on the road long when I saw a cyclist pushing his ride up from the trail and he yelled out to me. I looped around a turned out he had a flat and had neglected to bring 5mm allen wrench to remove his front wheel. I of course had my multi-tool and helped him out. He was a pretty fast tire changer so it wasn’t that long before I was back on the road. 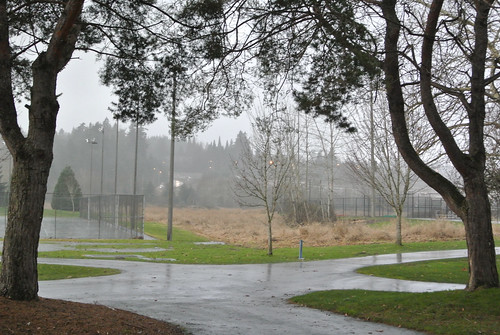 Following the edge of a lake the road has it’s ups and downs. The wind had shifted too, so what had been a cross/tail wind was now more of a head wind. But I was in trees enough that the wind wasn’t much of a problem, but it had blown in low, dark grey clouds and as I pulled into Marymoor Park, it was quite dark, though still an hour and half before sunset. I wanted to make my coffee on the lake so I made an executive decision that I’d ride a loop around Lake Sammamish and make my coffee at Idylwood Park just on the west side of lake. But as I pulled into the main parking area of Marymoor park the skies open up and a real downpour began. I rode to the park concession building which had large eves. There were two other cyclists sheltering there along with a couple arguing in Russian. We all waited out the worst of the downpour but set off one by one as it slackened. 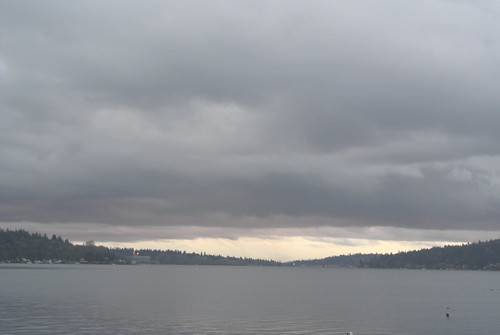 At this point I abandoned my plans to ride around the lake – not a bad road but in twilight and pouring rain I figured a more direct route was advisable. Plus I ended up taking that direct route I had wanted to judge the timing of. This route follows the 520 Trail to the outskirts of Bellevue and then takes more out of the way roads to where it intersects with the Lake Washington Loop route which then connects to the I-90 trail. During this ride the rain slowed and there was just showers on and off for most of the rest of the way. I was about to cross onto Mercer Island the sun set and through gaps in the clouds at the horizon I could see the orange, purple and yellow glow. 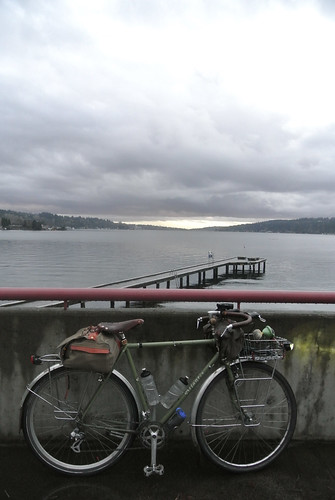 I was back on the I-90 trail and simply reversed my earlier route across Mercer Island and then onto the Beacon Hill Greenway. It was after five pm, just fully dark and my odometer ticked over to 41 miles as I rolled to my front door. Once again I failed in my making coffee out of doors, but it was a satisfying ride on a gloomy winter day.

Check out my photos from this ride on Flickr.