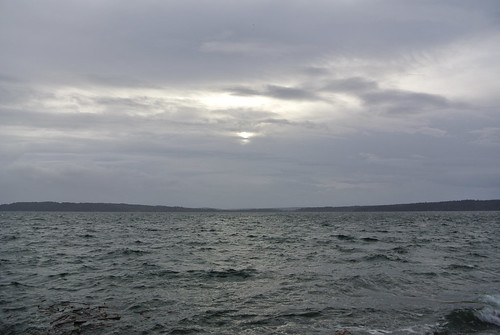 I was inclined to take a ride in the short amount of sunlight available on the Winter Solstice and thought I’d head to the beach at West Seattle and bile up some coffee.  I loaded up my trusty Atlantis with my camp stove, alcohol, some coffee (also tea, in case I decided I was done with coffee for the day by the time I pulled over), put on my winter ride togs and set off just a bit before noon.  I decided that I should get lunch in West Seattle before any other activities so I took the most direct route there. I exited Beacon Hill on Columbia which is pretty much a direct I-5 and West Seattle Bridge entrance.  I thought there was an exit that wouldn’t put me on either of those highways but as I descended past the point of no return I became less sure.  I decided to just press on figuring I could get off the first exit on the West Seattle Bridge if I had to. It being Sunday, noon-ish, there wasn’t a lot of traffic which made these decisions easier.  I always think one needs to take a certain amount of chances when on is riding, especially on routes.  This one worked out okay as before I was on the West Seattle Bridge proper I was able to exit onto Spokane Street.  From there it was a straight shot (with a short jaunt around a stationary train blocking the way) to the Alki Trail. 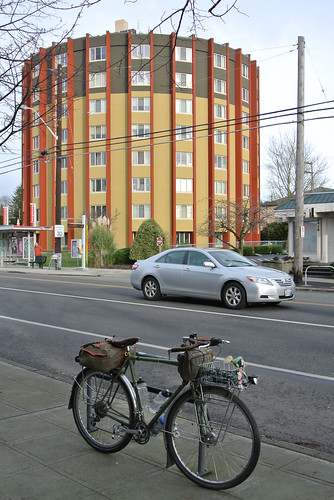 Atlantis in front of West Seattle’s most distinctive building 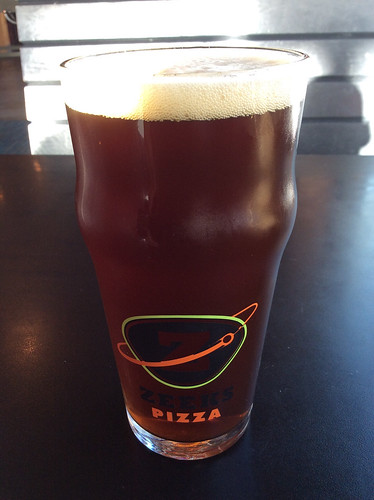 Over the Duwamish and onto another trail to Avalon and then the long slow climb up to downtown West Seattle. I rode down California street, past the Sunday Farmers Market, to where it intersects with Fauntlaroy where I stopped at Zeeks Pizza for lunch.  While I’m mostly a Neapolitan Pizza kind of guy Zeeks makes this Thai Pizza, that barely counts as a pizza, but I find myself needing to have every so often.  Being out of their delivery radius in my current dwelling this seemed like a good opportunity to avail myself of this fine item.  The Thai “pizza” is a pizza crust with peanut sauce, cheese and then Thai approrpriate veggies: broccoli, red onions, green peppers, bean sprouts, julienned carrots, cilantro and so on.  Such a great thing. Since pizza – even if it’s basically Thai-fusion flatbread – requires beer so I paired it with a Reubens Brews Roasted Rye IPA, which had distinctive rye notes and was appropriately winterly robust.

I didn’t linger overly long at Zeeks and was soon enough back on the road and heading down Fauntleroy toward Lincoln Park where I’d initially thought I’d get back on the Alki Trail and find a beach to bile up my coffee. But it was only a mile or two away from where I’d just had lunch so I thought I’d keep heading south on the coast and stop at a convenient park when I felt moved for coffee. I passed the ferry terminal and then there was a pretty good climb up from sea-level. Trying to stay on the coast I stair stepped through little residential streets until I was on Marine Drive.  There were plenty of big houses on the bluffs above the water but not much by way of parks or access to the beach. But it was nice riding with the occasional great views of the sound.  At one point way up ahead I could see a point sticking way out into the sound. It looked too far away to ride to on this short day, but I filed it away for future explorations.

The road curved inland to make it’s way around a cove and I noticed that I was on a route used for some bicycle ride with an ‘R’ symbol in it’s Dan Henry’s. As I’ve related many times in these pages, following random Dan Henry’s is a favorite pastime of mine so once again I set off on unknown routes.  I was in suburbia now with the occasional busier arterial, but clearly this route was working it’s way toward that point I saw. There was several good climbs on this route but it flattened out as I came into Burien.  Old Town Burien, which I can’t ever recall having visited, looks pretty nice. A brewpub of the Elliot Bay Brewery, numerous good looking coffee shops, several books and a big brand of the Seattle Public Library all along the main drag.  I kept following the Dan Henry’s even though the sun was waning and it had really clouded up from the days earlier partial cloudiness.  I even felt a few drops of rain. 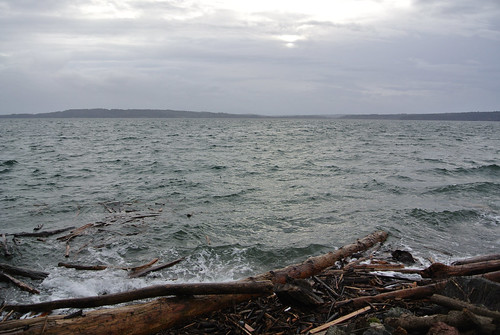 Dwindling sun over the sound on this, the shortest day of the year

The Dan Henry’s led me into the woods and down a real steep winding road, that I was hoping I wouldn’t have to climb out of.  It opened up, right at sea level on the sound. I rounded that point I saw earlier and snapped the above pictures.  Wind was blowing from the south, it was pretty cloudy now and much cooler.  But I’d soon heat up as I climbed back up to Burien. Thankfully it wasn’t a there-and-back and the road and the Dan Henry’s hugged the water before climbing back up.  At last I reached a point where the marked route was heading back down to the water and further south where I felt I had to start making my way back home. I pulled up Google Maps and found that I could return to 4th Ave which I’d ridden into Burien and follow it almost all the way up the Duwamish Valley.  So this I did.

4th went up and down and there was definitely some traffic on this route but it had either bicycle lanes, or a mostly empty parking strip most of the way, so on a Sunday afternoon it was fine enough.  It more or less ended at Westcrest Park where you could either head east into South Park or West into White Center.  I rode through the park on dirt trails – which was good fun – and then through residential neighborhoods until I dove down into the valley and onto the Duwamish Trail.  From there it was an easy jaunt over the 1st Ave Bridge and into Georgetown.  Pretty deep into dusk now, I made my way toward I-5 where I had previously scouted a signed bicycle route up to Beacon Hill.  This worked out well and I soon crossed I-5 and was up onto the Beacon Hill Greenway.  I made it back to my pad right as the sun was sinking below the horizon, lighting up the clouds a dark orange.

This rather aimless route turned out to be really great, with certainly a few sections I would tweak for a longer ride. Those Dan Henry’s I was following I ended up seeing again when I was on the Duwamish Trail. I figure that route followed to coast perhaps as far as Dash Point State Park and then cut east to the Green River Trail where it would eventually connect with the Duwamish Trail where I encounter those symbols. That would be a pretty great ride and I want to get back out there and do the whole thing. But that would certainly require more daylight than I allowed on this day, but could very well be a good winter ride.

I put the route up on to RideWithGPS as you can see below. My odo stated 31.1 miles for the ride and the below route is as well, so I think I recalled the route pretty well.