As the days get shorter and the temperatures lower I’ve found that I’ve been enjoying taking little short rides on my Quickbeam. I’m generally more of long exploratory ramble kind of guy, but I often set out late as the mood strikes.  In the winter that leads to my riding being a lot more utility based, or the occasional pre-planned more “epic” outing.  But since I’ve moved to the Beacon Hill neighborhood in South Seattle, I find short rambles in this still fairly new to me region to be a nice way to squeeze some riding into the minimal daylight. 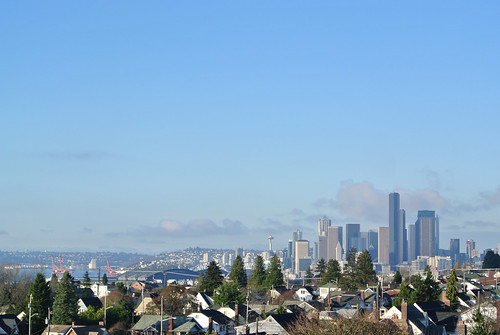 Riding around Seattle, which is plenty hilly, on the Quickbeam I found doable but wasn’t loving it. So last spring right before I set out on tour I converted it to a three speed. I had a wheel built with a Sturmey-Archer S3x fixed three speed hub, to which I put on a freewheel cog. Then it was simply a matter of running cable up to a bar end shifter. I did take some care with this, using nice brackets where I could as this is a “permanent” change as far as I’m concerned.  With the tour looming I abandoned the project, nearly complete but needing a lot of fine tuning.  Well I’ve mostly got it dialed in now and I really love it as a three-speed.  It’s still a bit of effort to get up some hills and of course some of the steepest require the “fourth gear” (i.e. pushing) but that’s all part of the charm.  The Albatross bars have taking some getting used to, but I love just rambling around the neighborhood, perched up high checking things out.  Perfect right for running errands, or like on this day, just head out for a couple of hours in the dwindling late autumn sun.