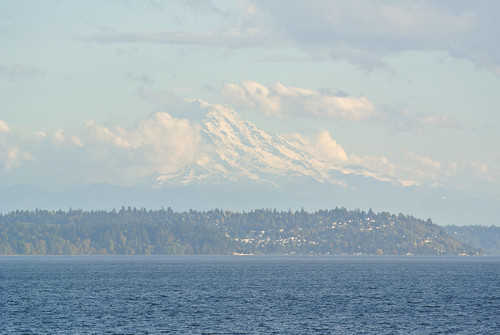 Since returning from tour I haven’t had a lot of chances to get out in the (nearly) always beautiful PNW Autumn.  My bicycle needed a bunch of work and it took getting into a new place and emptying out my storage unit to have the necessary tools. Then a visit to family out of state took me away during prime early October weather.  On my return – just last Thursday – it looked like persistent rain had moved in early.  Well that forecast changed and it was looking to be just overcast on Saturday clearing up in the evening, with Sunday being mostly clear with temps reaching the low 70s (F).  Reading this post from Cliff Mass I saw that the lows had been unseasonably high and thus I decided an overnighter was in order. 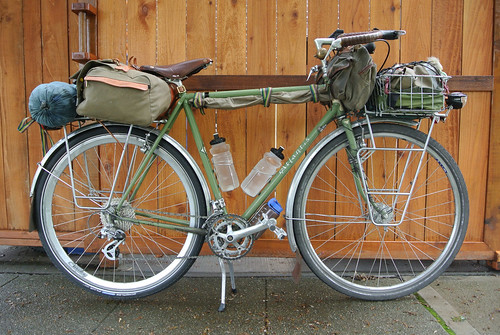 I had decided to embark on this trip pretty late and I did have a couple of final tasks to complete on the bicycle. In the above picture you can see my Atlantis as set out. Since returning from tour I have replaced the Shifters, the pedals, the middle chainring, the chain and the rear derailleur. This morning I replaced the cassette and the rear tire and I was ready to go. Since this was just an overnighter I only needed two meals and a few pieces of off bicycle clothes, so I was able to pack as minimally as possible. In the saddlebag (a Grant Peterson top 5!) I have my sleeping back, inflatable pillow, Trangia cook set, rain gear and the off bicycle clothes. In the basket I have my air mattress and my Grab Sack (another top 5!) with my camera, journal, iPad Mini and such in it. In my Hobo Bag (best h’bar bag ever) I stuffed in my toiletries and food bag. Strapped on the back rack is my tent with the poles along the top tube. Pretty amazing how light a load camping requires for just one night. 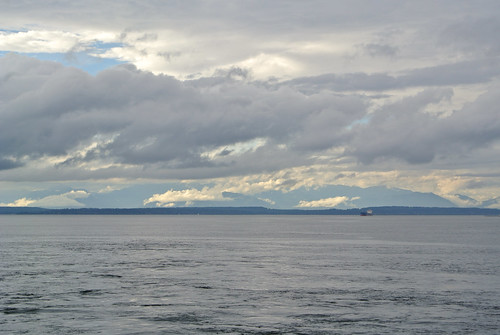 It had rained that morning but by mid-afternoon the clouds were breaking up. I had decided to camp at Fay Bainbridge Park on Bainbridge Island. This is the closest campground to Seattle and it’s really close – I rode 12 miles to the campground. This has it’s positive side – I left around 2:30 and on a day when it is dark by 6:30 that meant I was able to setup and cook while it was still light. Of course I would prefer a bit more of a ride when I have more time, but there is no reason one could ride clockwise around the Island from the ferry terminal and get in those miles. But on this day the late departure, plus the ferry trip and 7-8 miles on the island worked out just fine. 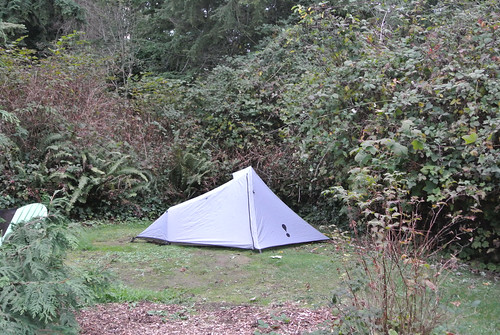 The campground has an upper area with walk-in camping and a lower area with sites under the hill and along the beach. There is an electronic pay station down there where I paid for the hiker/biker site, a reasonable US$7. I then proceeded to ride around for half an hour trying to find said h/b site. I never did. I did an internet search and found via Google Books a map of the park which indicated that the h/b area was in the walk in area. As there was no-one camping up there (there was about half a dozen campers on the beach) I just took a space up there. This was a good deal as I was able to utilize the covered picnic tables for cooking. I setup, cooked, and by the time I cleaned up it was pretty dark. I took a cup of green tea to the beach and sat there in the glow from Seattle listened to the gentle surf and the rumble of the passing ferries.

a creaking frog,
the bobbing glow of eyes,
this misty autumn night 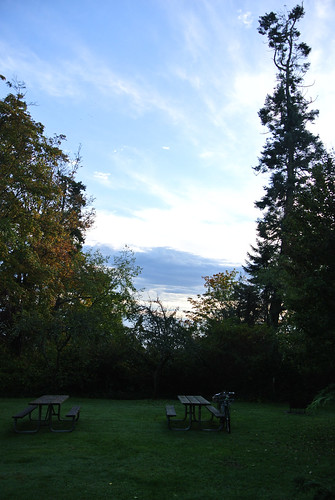 I slept late and took my time making breakfast and packing up and then headed down to the beach. It was a lovely morning with blue skies streaked by torn up clouds. Pretty windy too, with stiff gusts of wind. Since I had left late and took the short route here my plan was to ride around the island before heading home. I’ve ridden Bainbridge plenty of times, but usually (mostly) follow the Chilly Hilly route which circles the island, staying on roads that can support 7000+ cyclists. But on this day I started following Dan Henry’s on the road in the shape of a pie and green arrows painted on the road. These routes took me on narrower roads that dove down to the water and then right back up, across the island and through Fort Ward Park. 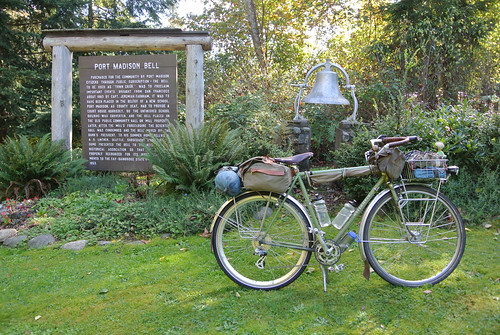 It was such a lovely autumn day, with big gusts of wind blowing leaves all over the road. I finally accomplished something I wanted to do for a long time: I caught a falling leaf while riding alone. A big gust of wind blew a bunch of leaves toward me and without thought I just reached out and caught a large blowing right by me. The Dan Henry’s wended a route on and off the Chilly Hilly route so I saw the usual landmarks: Port Madison, the Bainbridge Island Frog, many views of the Puget Sound and of course mostly took me on the great Bainbridge Island side roads. 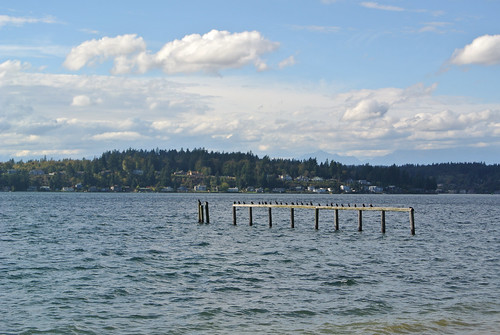 The Dan Henry’s eventually took me on this climb up the middle of the Island and then wound down to Lynnwood which had really been built up since last I was here. I had lunch at the Treehouse Cafe there, a location where I have many times had an ice cream cone but never actually stopped for lunch. Well the food was good and while I had a sandwich it looks like they make a good pizza as well. I walked around Lynnwood a bit checking out all the new shops and restaurants before rejoining the Chilly Hilly Route for a stretch. The Dan Henry’s pretty quickly took me off the route and I ended up riding through Fort Ward – completely new territory for me. Well this former military fort, now a small park right along the edge of the island allows one to ride a bit more along the water. Especially if you continue onto South Beach road after the park. 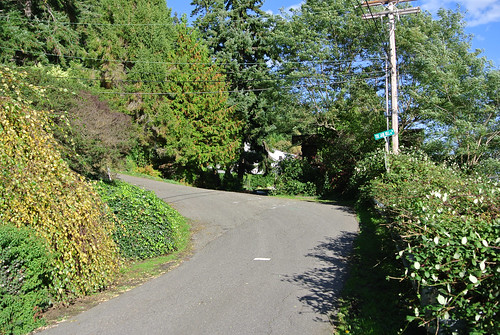 Riding the narrow road right on the edge of the island is quite scenic and with the wind blowing out of the south, a nice ride. Of course you do then have to ride up Toe Jam Hill which was by far the steepest hill I’ve ridden on Bainbridge. There are longer hills and plenty of pretty steep hills, but this one took the cake. As you rounded the curve pictured above painted on the road was “Good Luck”. I did make it up the steeped, cracked pavement and after a bit more time on the heavily wooded Toe Jam Road, I turned onto Country Club road which took me back to the Chilly Hilly route which I’d follow for the rest of the day.

One of my favorite spots on Bainbridge Island, is this memorial park with a Tibetan Prayer Wheel. As always I stopped and spun the wheel and took in this peaceful spot. But after leaving the park I rode steadily back, along the Chilly Hilly route primarily, back to Eagle Harbor and the ferry. I needed to be back home before six and while there was still plenty of riding I could have done on Bainbridge, not to mention the quaint little town of Winslow which I’ve never really explored, I headed straight to the ferry terminal. Of course I did end up waiting a bit for the next boat, but I enjoyed the waning day and being on the water. The ride back featured stunning views of a cloud enshrouded Mt. Rainier, big fluffy clouds hovering over the Seattle cityscape and many sailboats out enjoying this windy, beautiful autumn day. 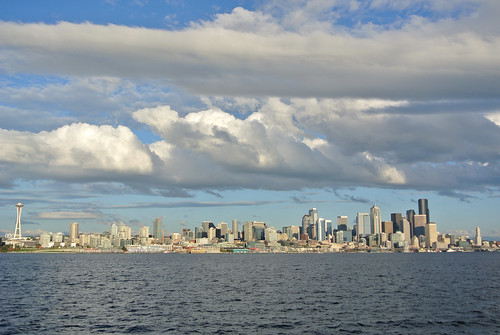 Check out all of my pictures on Flickr: Autumn Overnighter.