“The true traveller is without a goal, it is the absence of goals which creates the ultimate traveller.” -Gao Xingjian, Soul Mountain

It’s been two years since my Journey to the East (for which I’ve finally finished sorting the bulk of the photos. See my Journey to the East Index) and a couple of months back I’d began to feel the itch again.  I began looking into trips I wanted to do and there were two that came to mind. I always regretted that I stopped my West Coast trip at San Francisco and I really wanted to do the entire Sierra-Cascades. Both of these routes are great but I found that what I really wanted to do was a ‘tour without a goal’.  That is to say tour more organically without a big “get to east coast” or “go border to border”.  Perhaps such an event will occur, perhaps not.  I also have been really hankering to get into the mountains which seems like the ideal place to wander without much of a goal.

Circumstances changed at my job and I found myself (happily) unemployed at the end of May. This left me plenty of time to get ready for a longer tour: downsizing stuff, getting new equipment, putting stuff in storage and basically arranging to be homeless for multiple months.  I decided that I would use the Sierra-Cascades route as my framework: it would give me a lot of routes through the mountains, bring near many places I’d like to visit and also does have a start and endpoint I can use as I wish.  So I got the maps that Adventure Cycling puts out but I also have the original version of this route, Pacific Crest Bicycle Trail by Bil Paul, which he wrote in the early 90s. This uses more off the beaten paths, side routes, forest roads and such than the ACA maps and between the two routes I should be able to spend so quality time in the mountains.  As I’ve noted in earlier posts I’ve wanted to hike the Pacific Crest Trail since I was a wee lad but since my heart turned toward cycling this is trip for me.

I put all my stuff in storage and moved out of Seattle on June 30th. I’ve been staying with friends in Olympia for the last couple of days, but now, July 4th, 2014 I’m heading off on my trip to the mountains. I know from having done bits of this route before that phone and internet connections in the mountains are shaky.  I’ll be posting blog posts here as I usually do, but will have to be catch as catch can. Thus posts may cover multiple days, or I may posts several days as I get a strong connection.  We shall see how it goes, but I will be giving it the old college try. So keep an eye on this space if you want to follow along. 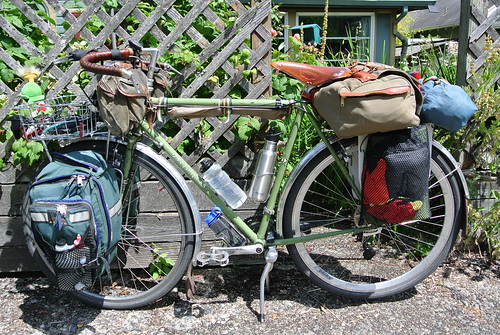 Photos for this tour can be found in this Flickr album: Tour Without a Goal

1 thought on “Tour without a goal”