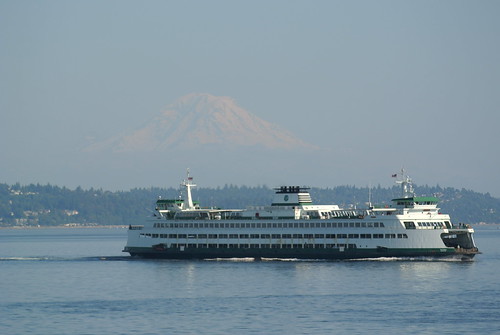 We had a particularly wet winter and early spring here in the Pacific Northwest (record setting rain even) but things have really turned around. April was above average temperatures and we’ve had many days in the 70s (f) and even a few low 80s (f). There was a string of weeks where it would be really nice mid-week and then rain on the weekend.  All of this has led to my taking my first bicycle camping outing at the very end of May. 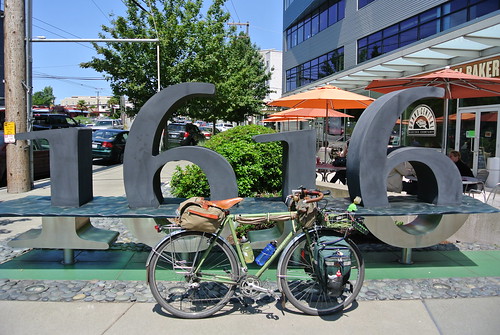 My touring plans for 2014 have shifted from a doing a series of two-three day trips to far more ambitious plans (more on that forthcoming) but the situation in the above ‘graph meant that my riding has been commuting with the occasional rec ride.  I’ve been really picking up the rec riding of late and I wanted to get in a few overnighters for both the riding and to test out some changes to the kit.  So with predictions of days (five days it appears now) of warm sunny weather I decided to update a planned overnighter to South Whidbey State Park to a two-nighter trip around the norther Puget Sound.  With thoughts of future touring in mind I also took more or less my entire planned setup, minus only some extra clothes I’d take for more sustained touring. 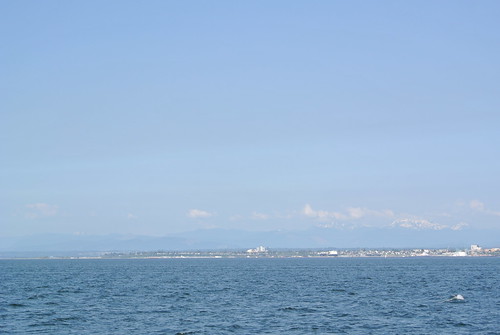 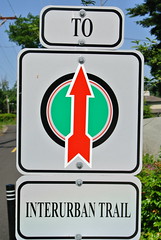 As is always the case I left a bit later than I’d hoped and I had to make a couple of stops on the way (for lunch and at the co-op for supplies). I left my apartment a bit after noon and left the store in Fremont (about 5 miles away) around 2pm.  I was on the way, taking a pretty familiar route to the ferry at Mukilteo.  I rode on the Interurban Trail for a good bit of the way and then at Lynnwood I left the Interurban and crossed the 99 and rode arterials and suburban roads until it intersected with the Mukilteo Speedway and the road down to the ferry Terminal.  I had arrived just as the ferry was unloading so it was a pretty short spell before I was on the ferry and we were heading to Whidbey Island.


I’ve ridden this ferry countless times – I grew up on Whidbey Island – and it is always enjoyable. It’s pretty short, around fifteen minutes, but it nicely breaks up the ride.  On a nice day the views are spectacular and it’s bracing to be out on the deck.  Soon enough I arrived at the Clinton Terminal on Whidbey Island and rode off the ferry after all the cars.  There is a long hill up from the terminal, fairly steep at first and then it flattens out a bit and is a long steady climb for over a mile.  Then it is rolling hills on Hwy 525. At this end of the Island there are nice scenic roads that route you away from the 525 but they almost always go way out and then back to the highway and can feature steep climbs. So for about 8 miles I stuck with the highway.  Google Maps route me off for one section that I had actually never ridden before. This was a nice scenic route past a wildlife sanctuary and brought one into the tiny burg of Freeland from the backside. 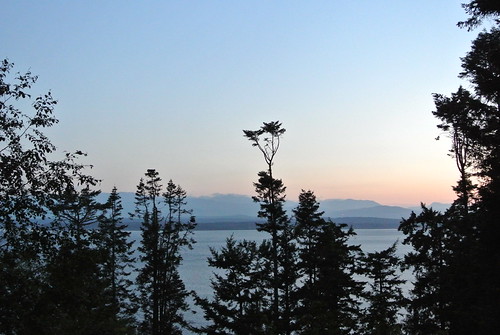 From Freeland I returned to the 525 but after less than 1/2 a mile I was on Smuggler’s Cove road, taking heavily wooded backroads to South Whidbey State Park. There’s some serious rolling hills on this route and I was definitely feeling it, as I’d ridden pretty much continuously from Fremont to this point with only the ferry trip as a decent break.  But it was good I did so as I arrived at camp just after 7pm. The Hiker/Biker sites are right by the entrance and I quickly picked my preferred site (I was the only one there) and setup and cooked dinner. Then I went and paid up and walked around the camp. The h/b sites are on a bluff and I could see there was a fantastic sunset but there wasn’t a really clear view and it was a steep trail down to the beach.  So I enjoyed the obstructed view and after it was pretty deep twilight I retired to my tent for the night. 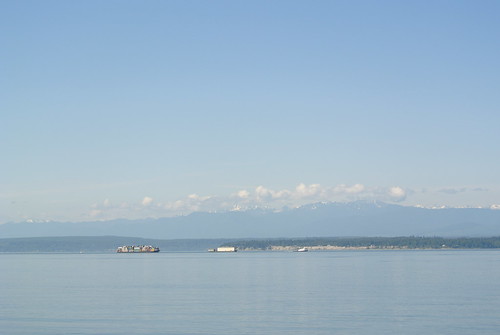 I awoke to a cacophony of twittering birds including the knocking of a woodpecker.  Said woodpecker kept it up for a good hour or so at one point working a fallen log on the edge of my campground.  It’s pretty amazing how just away from the towns, in these relatively small reserves there is just so much more wildlife.  I cooked breakfast and then headed down to the beach.  It was shaping up to be a marvelous day. The winds I’d rode against yesterday had yet to arise and with it already clear it looked to be even warmer.  This was my short day so I lingered at the beach, reveling in the view of the distant peninsula with the Olympic Mountain range. There were numerous families with their kids already down at the beach and more came down as I hike the half mile trail up from the beach. Back in camp I packed up in short order and hit the road around 11:30. 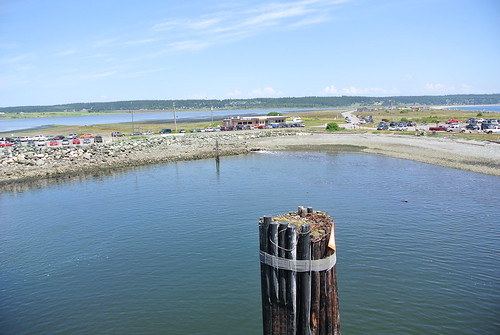 It was just over 12 miles to the ferry dock with a bit on 525 and 20 and a bit on side roads.  I arrived there about 20 minutes before the ferry and I got a coffee and wander around the beaches.  Soon enough the ferry had arrived and I was on my way.  This is a longer trip than my previous ferry ride, around half an hour with of course time for the loading and unloaded.  I was in Port Townsend by 1:45 and I headed straight to Waterfront Pizza where I got two large slices of pizza. I wandered around town, mostly just taking in the sights but I did stop at one of it’s small bookstores.  After a bit I decided to ride up to Fort Townsend State Park where I’d camp for the night.  This campground I feel is ideal if one wishes to mainly hang out in the southern parts of PT (where the brewery and best alehouses are) as you can just ride the PNW Trail most the way to the ‘ground. 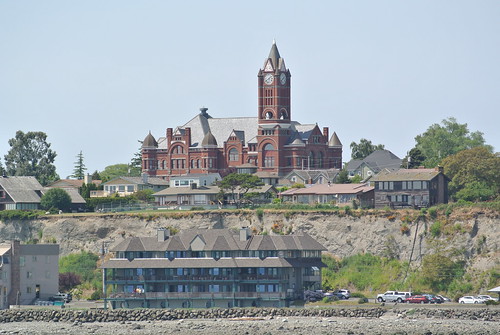 I setup my camp there and rested for a bit and then headed back into town. I went to the Pourhouse, an alehouse near the port that specializes in craft beers.  I spent and enjoyable evening there tasting several fine beverages and getting a bottle to go as I headed back to camp.  Back in camp I cooked dinner, enjoyed my takeaway beer, cleaned up in near darkness and then hit the tent.  All in all a relaxed and enjoyable day. 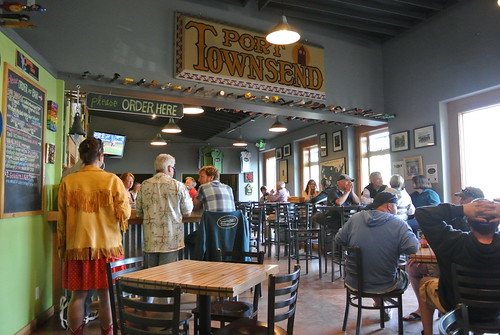 I once again woke to chattering birds and the knocking of a woodpecker (though I never saw this one).  This day dawned overcast and cool, especially among the trees of my campground. I made a hearty breakfast of coffee and oat bran with walnuts and dried cranberries, trying to use up my supplies.  I packed everything up and left the campground around 11am. 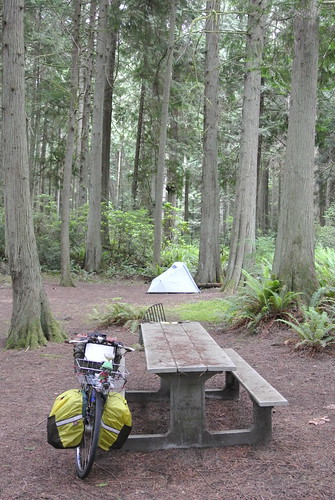 It was sunny and mostly clear now, with streaks of clouds across the sky. The route began on hwy 20 and continued onto why 19 as 20 veered westward.  At the tiny town of Chimicum 19 becomes Beaver Valley road and follows the valley all the way to it’s end. I’ve ridden both sides of this valley on different tours and it is always a pleasant and scenic ride. Though for a sunday afternoon there seemed to be more traffic than I’d have expected. 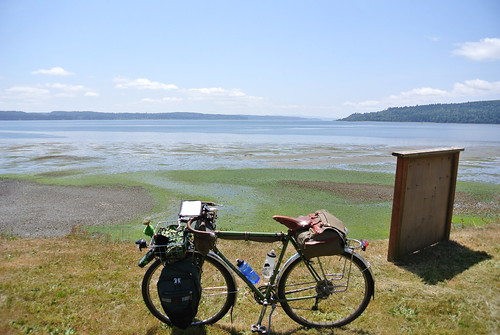 The valley ended at a T intersection at hwy 104. As I turned left onto the highway an RV was also making the turn and as it did it’s side door swung open dumping a bunch of stuff right into my path. I stopped before hitting an empty plastic container and watched as the RV kept going a bit and then pulled over to the side. There was something protruding out of the open door that looked like a hobby horse. I had to ride into the highway to ride around the RV as they completely blocked the shoulder.  The route was on 104 for a bit and then a nice section on a frontage road that was right on Hood Canal.  I stopped to take the above picture and eat an apple on a bluff above the tideland.  There was a super killer hill off this side road back onto 104. 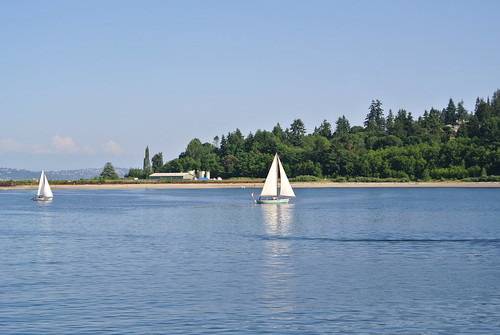 The road came out right above the Hood Canal Bridge which last time I rode it, it wasn’t much fun. The drawbridge bits were steal grating with no shoulder and plenty of traffic. But it has been improved since then and is now totally no big deal. There is a shoulder the entire way and the grated bits have a shoulder as well with decking on it.  I climbed up from the bridge and about a mile from there was Port Gamble where I stopped for lunch. The last time I was here – my first tour! – there was a medieval fair at Port Gamble and it is here this time as well. If it is a “first weekend in June” sort of thing then this would make sense as it was around then of my first tour. 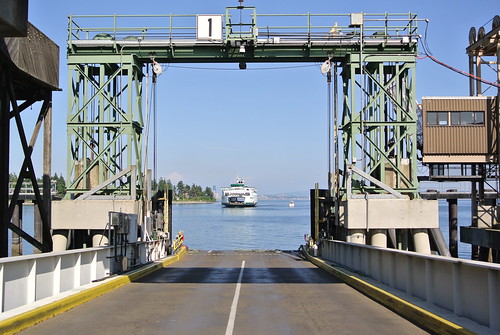 The route from Port Gamble was on back roads that were incredibly hilly. For narrow winding roads there was more traffic than I’d have thought, but not constant or anything. The road was through woods and farmland was winding up or down almost all the time.  At one point I was passed by a couple of roadies as I was climbing a hill while coming down the other side a man was walking two horses as cars came at just this time from both directions.  Eventually I was down with the backroads and at the Suquamish Reservation I crossed another bridge onto Bainbridge Island. I’ve of course ridden Bainbridge many times, usually the scenic loop along the water. This time though I just stuck to the highway and rode straight across the island to the ferry terminal.  This was an easy ride on long rolling hills with big wide shoulders. Plenty of traffic of course, but it was only about 8 miles before I was to the ferry terminal. 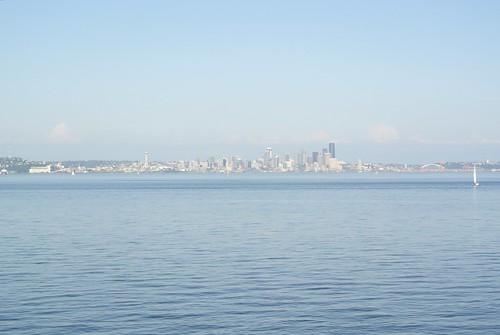 As I waited for the boat more and more cyclists arrived to take the ferry back to Seattle. It was a beautiful day, sunny and pretty hot after the morning clouds. So no surprise that a lot of cyclists, roadies for the most part, took the ferry over to Bainbridge for some sunday cycling.  The ferry arrived after 20 minutes or so and I mostly just relaxed on the boat until we docked at downtown Seattle. From there it was a ride on the waterfront, through Pioneer Square, up to the International District and back to my apartment. I arrived home around 6:30 in the hot evening – another successful and enjoyable jaunt.

Check out all of my photos from this trip: Late May Two-Nighter on Flickr.