The pub which is most frequently my destination is the Celtic Bayou in Redmond.  Redmond is so often a junction point in my rides, either starting or ending that I so often choose to visit the Celtic Bayou for lunch, dinner or just a cold beer.  As the name implies they are an odd fusion of Irish and Cajun, which while seeming odd actually works out for the best. You get Irish style beers and Cajun style food.  A good deal as one doesn’t go to Ireland for the food or Louisiana for the beer.  Of course you can get your Irish Breakfast there and yeah they got Bud longnecks in the fridge but that isn’t why you come here.

Next door to the Celtic Bayou was the Far East Ireland Brewing Company.  I use the past tense as they are now sadly departed.  They were a solid little microbrewery that made a fine selection of very competent ales and some superb seasonal brews. Of their regular drafts their porter was the best, but I had no complaints w/r/t their IPA or Pale Ale.  Their stout was a little weak (though they had a much more impressive seasonal Imperial Stout but as they always had Guiness, that wasn’t much of a problem.  Alas the Far East Ireland Brewing Company didn’t last and the Celtic Bayou no longer served their own beers but a nice selection of local and international beers. On this particular day I was in need of lunch after a long morning of riding up and down hills checking out various garage sales (didn’t find anything of interesting fwiw).  It was a hot day over ninety degrees by the time I reached Redmond around 1pm.  The pub was pretty empty, with a few people in the restaurant area and a couple out in the beer garden. I saw at the bar and ordered a Blueberry Wheat beer.  Now wheat beers (with the exception of Belgian Wit’s on a hot day) aren’t my favorite and I tend to

avoid fruit beers, but I’m kind of obsessed with blueberries.  Thomas Kemper, back when they brewed beer, used to make a blueberry lager that was amazing. Again lagers aren’t my favorite style but it was such a refreshing drink with a hint of blueberry flavor that it was a major exception.  Interesting thing about that beer was that the blueberry flavor came from an error in the brewing process that they chose to maintain for that beer.  It was originally called Helles “blueberry” lager, though later they did begin to put actually blueberry extract into it.  Anyway this wasn’t that beer, it was Sea Dog Blueberry Wheat, which was quite nice and very refreshing on this hot day. Again it was just a hint of blueberry flavor that was nicely blended with the Hefeweizen beer.  A winner. 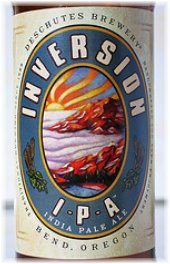 It being lunch time I took the opportunity to get some of that Cajun food. I had their shrimp po’boy, which while being incredible inathuentic is quite good. It uses fried shrimp which are mounded on the hoagie giving the hungry cyclist plenty to consume. I’ve sampled other of their cajun dishes in the past and they are much more authentic. I can definitely give their etouffe a thumbs up.  I’d finished my Blueberry Wheat by the time this arrived so for a second beer I ordered a Inversion IPA. After Anchor, Deschutes is my favorite all around brewery. Their Black Butte Porter is my favorite porter, their Obsidian Stout is an amazing, strong, rich stout, their Mirror Pond Pale Ale is second only to Sierra Nevada and their Bachelor ESB is a fine example of that style.  Oddly though I’ve never been that impressed with their IPAs. They make a few seasonal ones that a totally decent but their standard one, the Inversion, well it’s never done much for me. Hard to say why really, it’s not a gonzo IPA, it’s fairly well balanced. Maybe it’s the hops they use.  Anyway on tap it was a bit better I think, but it’ll never replace my favorite IPAs.

After finishing my IPA I headed out for the rest of my ride in the now even hotter day, with once again a satisfying visit to the Celtic Bayou.  While I do miss their own brews they do keep a fine selection on hand and they do serve reasonably priced and tasty food there.  They have an outdoor beer garden and put on live music on the weekends. I used to go every so often for Irish Sessions but I’m not sure if they do those there anymore. Always a good time though free live jamming and good beer. So the Celtic Bayou remains a regular destination for me in my riding and is well worth the visit for any thirsty (or hungry) cyclists in the area.